As a quarterly index focused on local markets, the headline figure was lifted by increases above 2% in the regions of Catalonia, Madrid, and the Balearics. This is the first time since 2007 this Tinsa index has end the year higher than it started, but we will still have to wait and see what the overall market index is for December, which will be published by Tinsa in a couple of weeks.

2015 was the year that Spanish house prices bottomed out, at least according to the Tinsa index, which is based on the company’s own valuations of both new build and resale properties. The index went from -4.5% in December 2014 to +1% in December 2015.

Despite the rising index, Tinsa point out that “It’s important to remember the market is tremendously heterogeneous and evolves at different speeds according to area.” Prices are rising in some areas, but still falling in others. “As many as 21 provinces and 15 provincial capitals experienced price increases in 2015, but at the same time, we can still see falls of more than 5% in nine provinces and 10 capitals when we compare the average price for Q4 with the same period in 2014.”

The Spanish real estate boom and bust has left the industry traumatised, as can be seen by Tinsa’s cautious interpretation of the better figures. “Prudence invites us to interpret rising prices in terms of stabilisation,” they say. “The incipient change in the trend is based on market values currently at minimums, so a progressive normalisation of the market can mean large percentage change increases, which can be expected to moderate in the coming months.”

Tinsa forecast the market will continue to stabilise and return to normality in the course of 2016, with prices falls moderating in areas where they are still going down, and rising between 1% and 5% in the areas recovering the best. However, they warn of “uncertainties that could end up influencing the expected evolution of the market,” most of all the “current political scene” but also high levels of debt and the poor quality of jobs being created by the economic recovery.

In the context of the SPI House Price Index Tracker (HPIT), the latest Tinsa figures provide further evidence of a trend towards stability, with prices rising a faction but showing no signs of taking off. 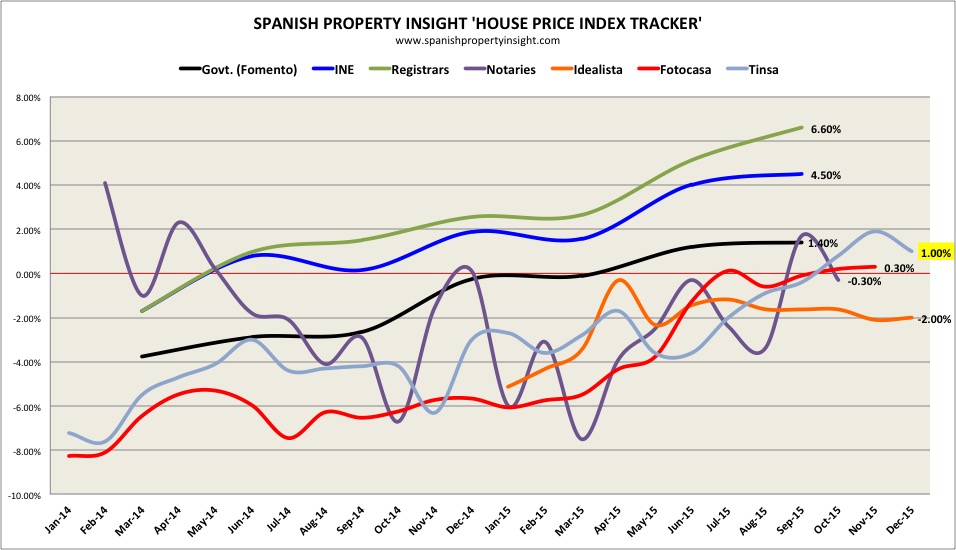 The appraisal company Sociedad de Tasación (ST) has also just released figures showing that new property prices rose 2.9% in the course of last year, the first time that has happened since 2007, up from -2.2% a year ago. New home prices rose 6.2% in Madrid and 4.8% in Catalonia say ST. They also report an increasing rhythm of sales in 2015, especially sales involving buyers from abroad.