Foreign demand for Spanish property in 2018: who, where, and how much?

The break down of foreign demand by nationality, region, budgets, and residency status, according to the latest report from the Association of Spanish Notaries, published last month.

Last week I explained how overall foreign demand and budgets for property in Spain retreated in the second half of 2018. This week I’ve prepared some graphs to illustrate how foreign demand changed by nationality, region, budgets, and residency status. I’ll let the charts do the talking.

First though, I’ll explain the map above, prepared by the notaries. The map on the left shows purchases by non-residents by nationality and region, giving the first two nationalities by region, and their percentage of foreign demand. So, for example, the British were the biggest group of non-resident foreign buyers in Andalusia, with 32% of the market, followed by the Swedes, with 11%. By definition, non-residents are buying second homes or investments, rather than main homes to live in. The map on the right shows the same but for foreign residents in Spain, mainly economic migrants from Romania, Morocco, and China, though also with some lifestyle migrants from the UK in Andalusia, Murcia, and the Costa Blanca, and Germany in the Balearics and the Canaries.

Now to the charts. 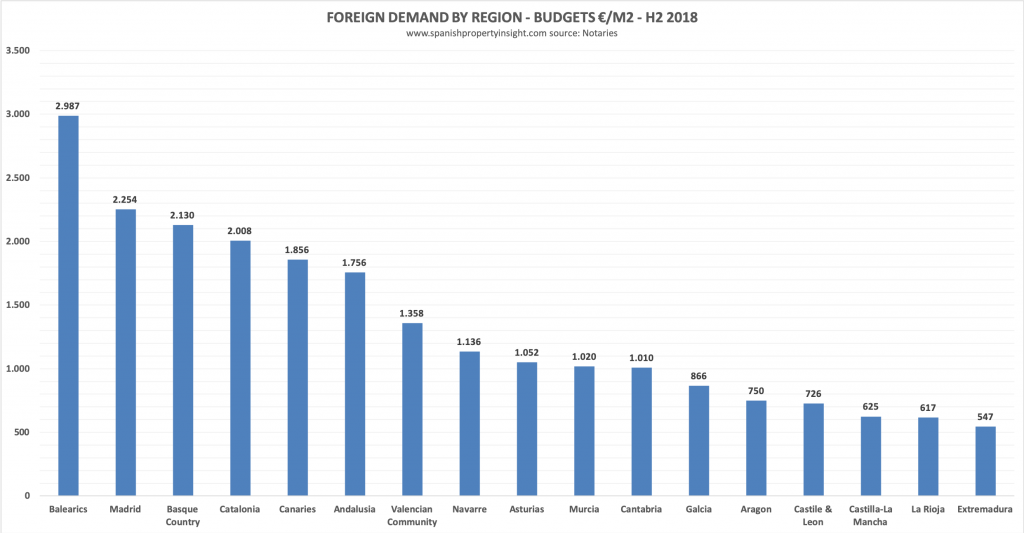 Thoughts on “Foreign demand for Spanish property in 2018: who, where, and how much?”