British demand for Spanish property in 2018

British demand for property in Spain rose 12% last year to 10,178 purchases recorded in the Spanish Land Register, back above the pre-Brexit referendum record of 10,156 in 2016. Although British demand fell in 2017 after the referendum, it appears the British shrugged off Brexit fears last year and returned to Spain in record numbers.

The next two charts, showing British demand for Spanish property by quarter and the annualised change each quarter, illustrate how British buyers declined significantly in the two quarters immediately after the referendum took place, and by as much as -28% in the last quarter of 2016, but then started recovering to increase by double-digits in most quarters last year. 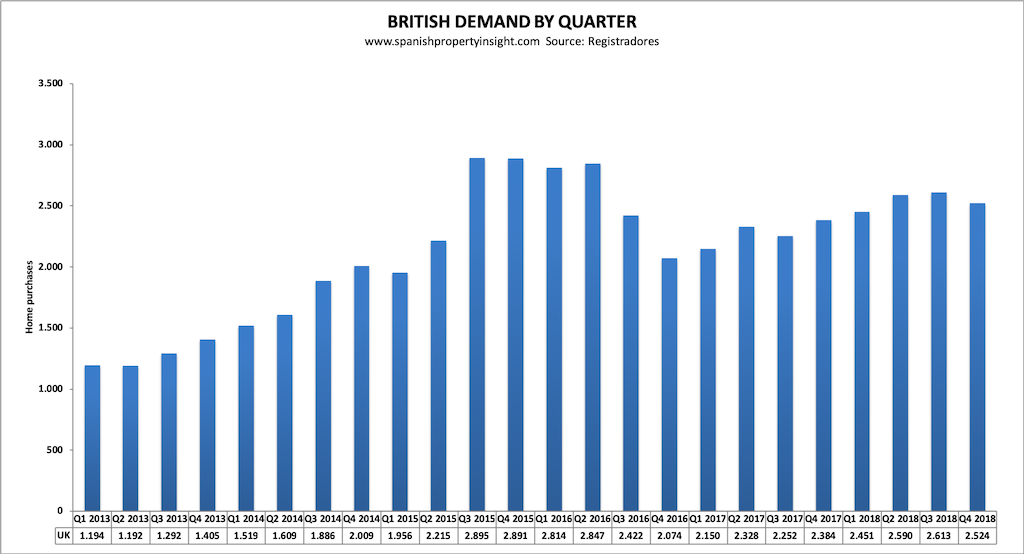 As a result of the recovery in British demand, the UK’s share of the foreign market for property in Spain has been steadily increasing from a low of 14% in Q1 2017 to 17% at the end of last year, though not yet back to the levels it was prior to the referendum, as foreign demand from other sources has also increased significantly since then.

More than any other factor, the weakness of Sterling compared to the Euro explains the decline in British demand in the months after the Brexit referendum. Once the Pound stabilised at a lower level British demand also stabilised and then began to grow again, though property professionals report that budgets at the lower end declined as many buyers simply adjusted expectations to match their lower purchasing power, rather than abandon their intention to buy in Spain altogether. At the high end of the market there has been little change in budgets, I’m told. People with money tend to be well diversified.

Feedback from my network of trusted estate agents in Spain provides more insight into British demand for Spanish property in 2018. “Although Brexit has had a massive negative effect on low and middle market sales, we are seeing more requests from buyers from the UK lately,” says Conor Wilde, head of Found Valencia, an agency specialising in quality homes in the Valencia City area. “There is absolutely no doubt that people from the UK still wish to buy a property in Valencia. We have a growing list of buyers from the UK who wish to complete on property once they have clear indication of what’s going to happen with Brexit. Over the past four months we have been consistently showing more property to British buyers. These British buyers in return will revisit Valencia once Brexit has settled. And since the news last week that the Spanish Government plans to safeguard the rights of British people living in Spain we have seen a dramatic increase in enquiries from the UK. But I feel it is still too early and that we will not see a large sales change until this Brexit fiasco is over.”

From North Mallorca, an area traditionally popular with upmarket British buyers, Gary Hobson, MD of Engel & Völkers North Mallorca gave me his thoughts. “We have had the same number of enquiries from Brits in general over the last few years, though the first two months of this year has seen a 50% drop in British enquiries. The British clients coming in, however, are very serious and they are still buying. As a result we have made a good number of sales to British buyers in recent months. I see the 50% drop in enquiries being from those nervous of Brexit and all the uncertainty it creates, whilst the other 50% are still going ahead with the pursuit of their dream of buying a home in Mallorca.”

Thoughts on “British demand for Spanish property in 2018”