Foreign demand for property in Spain rose 8.1% in Q2 compared to the same period last year, show the latest figures from the Spanish Land Registrars’ Association.

In the second quarter 15,595 Spanish home sales inscribed in the Land Registry involved a foreign buyer, up from 14,429 the same time last year. The chart above shows foreign purchases each quarter since Q2 2013, in which time foreign demand for homes in Spain has almost doubled.

Local demand also rose in Q2 – by 11.1% to 103,813 – the first time quarterly home purchases by Spanish nationals have risen above 100,000 since the real estate market crashed a decade ago. So the recovery is now being driven by both local and foreign demand.

With local demand rising faster than foreign demand, the market share of buyers from abroad fell to 13.1% of the housing market, down from 13.4% a year ago, but still relatively near recent highs, as illustrated by the next chart. 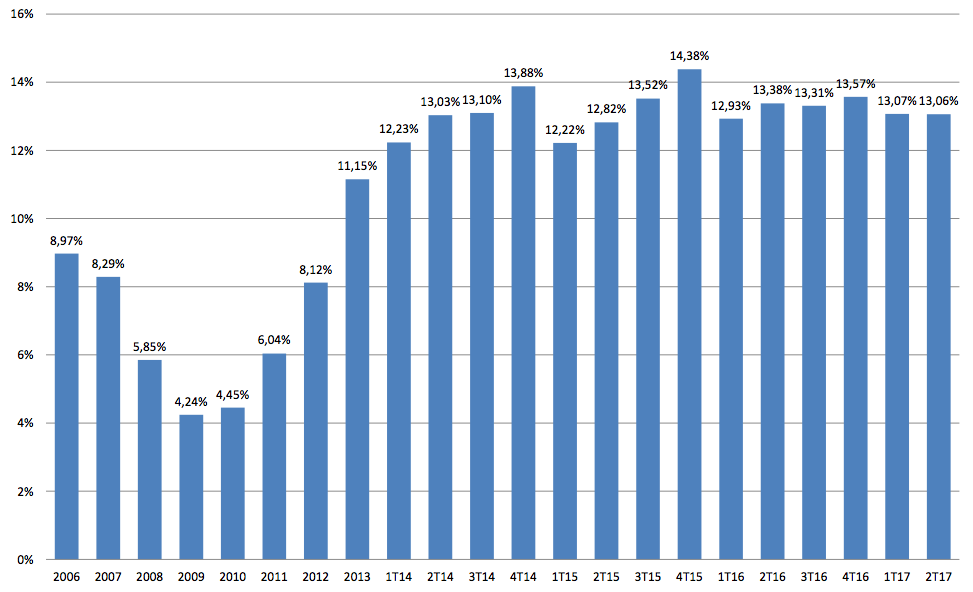 Demand as recorded by the Land Registrars (based on sales completed in the proceeding few months) breaks down by nationality (main markets) as follows:

In terms of market share by nationality (share of total foreign demand), the British are still the biggest group with 15% of market share (down from above 20% before Brexit), followed by the French with 9%, and Germany with 8% (largely concentrated in Mallorca).

Countries not itemised (‘rest’) are gaining market share as demand for Spanish property globalises and diversifies in a pattern similar to other western countries. This should be good for the market in the long term, reducing dependence on markets like the UK.

The two biggest foreign markets for Spanish property are going in different directions. French demand was up 30.8% in the quarter, whilst the UK market shrank 18.2%, though it is still the biggest market by a wide margin (75% greater than the French market). Demand from almost all markets increased, the only exceptions being the UK, Sweden (-3.6%), and Russia (-0.3%).

The decline in British demand for Spanish property is a clear result of Brexit and the weaker pound, as illustrated by the next two charts chart.

British demand has fallen by double digits for four consecutive quarters, but nonetheless was surprisingly resilient in Q2, posting a quarterly increase that leaves it still standing 5% higher than it was two years ago in Q2 2015, and still with the biggest foreign market share.

I had been expecting to see a bigger decline in British demand after Brexit, but it’s too early to declare the Brexit damage over. After recovering a bit in Q1 the pound has been on the slide again in Q2 as a result of Brexit uncertainty, and Spanish home purchases by British buyers tend to go in the same direction as the pound, just with a lag of a one or two quarters. So I’m expecting to see a quarterly and annualised decline in British demand for homes in Spain when the Q3 figures are published later in the year.

British demand aside, the overall picture is one of growing international demand for Spanish property that is pushing up prices in hotspots like Barcelona, Marbella, Mallorca and Ibiza. I expect this trend to continue for at least the next few quarters.