NOTARIES: Home sales and prices up in 2015, growth forecast to continue for now

Spanish home sales and prices rose in 2015, according to the latest figures from the notaries, in a sign that some sort of housing market recovery is underway.

The December and full year figures from the General Council of Notaries – just out – paint a picture of a market slowly recovering from a deep crisis. That’s good news in itself, but it doesn’t negate the effects of the crisis, which can still be seen all around. Some segments, in particular those that benefit from foreign demand, are recovering, but many others are still deep in the doldrums. So figures like these from the notaries, which aggregate all segments into national figures, conceal big differences between local markets. Not all areas and segments are heading in the same direction.

The notary figures are the most timely available, as they are based on sales witnessed by notaries each month, rather than sales inscribed in the property register a month or two later (published by the registrars and the National Institute of Statistics). They probably give us the best picture of what actually happened (at a national level) in 2015. So I’ll run through the main figures with a chart for each.

There were a total of 401,236 homes sold last year (including subsidised housing), with sales of both flats and houses rising for the second year in a row. Sales are still less than half what they were in the last boom year of 2007, but we should not expect to return to the inflated sales levels of a speculative bubble. That said, the market is still depressed by normal standards, so there should still be room for more growth in sales in the coming years, assuming that economic growth continues.

Sales were up by 9% in 2015, a smaller increase than 2014 (19%), in part due to the elimination of tax breaks for buyers that exaggerated sales in 2014 at the expense of 2015. The overall picture is one of reasonable growth, but nothing spectacular.

Sales turned down in December by 12%, due to the fiscal changes mentioned above.

Spanish house prices finished the year 2% higher than December 2014, the first time they have risen since the start of the crisis, as far as the notary figures are concerned. 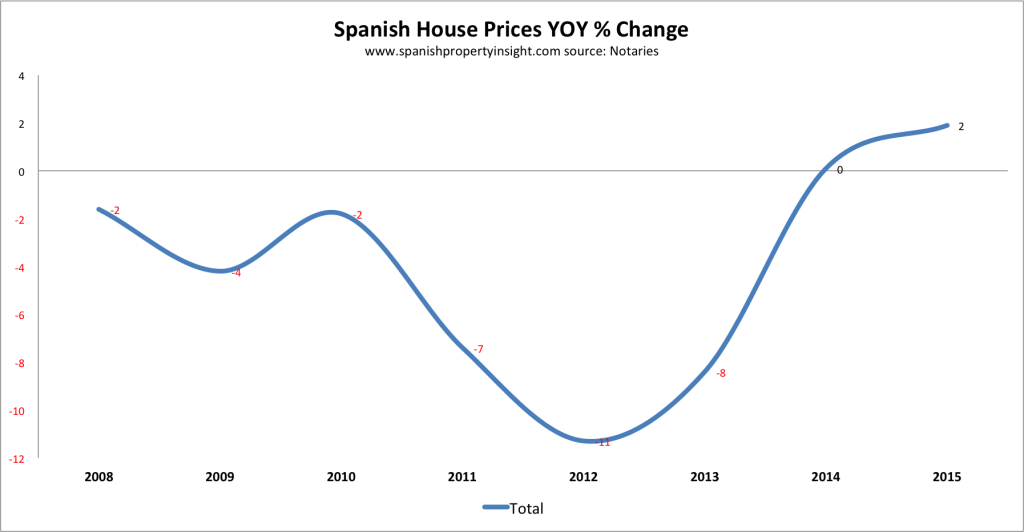 In the context of the SPI House Price Index Tracker, which tracks the seven-most important house price indices in Spain, the latest data follows a trend of stable prices with a slight upward momentum.

New mortgage lending to home buyers rose 23% to 170,266 last year, the highest level since 2010, but still just a third of boom time levels. Banks are keen to lend, but are still very cautious about whom they lend to. Many potential buyers are still shut out of the market by an inability to get mortgage financing.

The notaries conclude that they expect the first few months of this year to “continue the growth trend seen in 2015, although perhaps with more moderate values.”