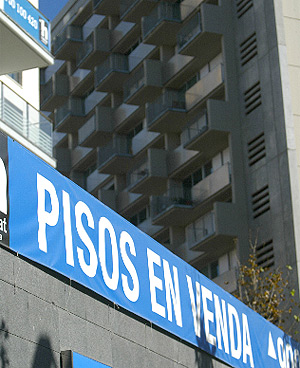 Spanish property prices were 30% over-valued, but have only fallen 10% so far. Ergo they have to fall another 20% before the correction is over. That’s pretty much the conclusion of the latest report on the housing market by BBVA, Spain’s second largest bank.

But prices won’t lurch down by 20% in one go, which would be the best thing for the market. Nope, the pain will be dragged out over the next 2 to 3 years. Prices will fall by 7% this year, 8% next year, and 5% the year after that. Prices won’t stabilise until 2012.

Even by historical standards today’s correction in prices is less than half way through, points out BBVA. After the last property crash in the early 90s, property prices fell in real terms for 21 consecutive quarters. This time around prices have only been falling for 6 quarters. If the past is any guide then we still have some way to go, at least another 8 quarters according to BBVA.

BBVA mentions another key reason why the fall in prices is far from over, namely the high level of house prices to annual disposable income (something I wrote about here last week). This ratio (house prices / annual disposable income) rose to 7.7 years at the height of the boom, and has now fallen back to 6.6 years. But that is a long way off the historical average of 4, not to mention the 3.5 it has fallen to in the US.

The biggest price falls will come where they built the most, where there are lots of unsold homes. That means around Madrid and Mediterranean provinces like Malaga (Costa del Sol), Castellon (Costa Azahar), and Tarragona (Costa Dorada). In contrast prices will fall the least in Orense (Galicia), Navarra, and The Balearics.

Banks must drop prices by 50% in some cases

Meanwhile, and new report from BNP Paribas Real Estate, the real estate arm of French bank BNP Paribas, argues that banks in Spain will start having to offer discounts of 50% in 2010 to shift some of their stock of property.