Spanish home sales in August went both up and down, reports the Spanish press. As usual, the reporting is mixing up different data sets, and leaving the public confused about the direction of the market at a turbulent.

In the last few days the Spanish press has reported that home sales went up in August by 6.8%, and down by 12.6%, as you can see in the example above. Now obviously, it can’t have done both. The press reports mix up two different data sets in headlines that overlook the difference between them, and send mixed messages that confuse the public. This careless reporting muddies the waters of the Spanish property market, making it seem even less transparent than it actually is.

As I point out almost every time I discuss Spanish home sales figures, there are two main sources of official data, 1) The Association of Spanish Notaries based on sales witnessed by them in the month, and 2) The Institute of National Statistics (INE) based on sales inscribed in the Land Register by the Association of Spanish Land Registrars. I explain the difference between the two sources in the blue box below.

Recently, the registrars have started publishing their data on a monthly basis, so we don’t need to wait for the INE publish more or less the same figures a month or so later.

A tale of two data sets

Home sales went up in August, thanks to pent up demand

Given that the figures from the notaries are more timely, this means that Spanish home sales actually went up in August compared to the same month last year, by 6.8% to 33,201. They also report that Spanish house prices fell by 7.3% to 1,271€/m2.

But even though backward looking, the figures from the registrars are useful because they provide more detail, for example on regional sales. You can seem from the table below that the market slump has been worse in the Valencian region (-24.9%) and Catalonia (-22.5%) than Andalusia (14.2%) and the Balearics (-3.6%). 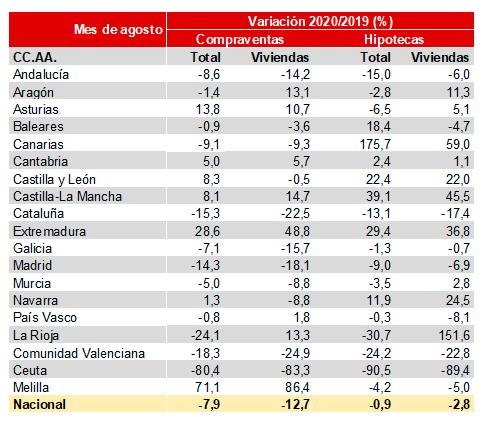 How is it that home sales rose in August, whilst Spain is going through the deepest coronavirus crisis in all Europe, with GDP forecast to decline by 12.8% in 2020 according to the IMF (chart below)? The most likely answer is because of pent up demand that was suppressed during lockdown and delayed until August. Overall demand is on the decline, I believe, but Covid-19 disruption is distorting the distribution of sales over time.

I expect the sales reported by notaries to decline significantly in the last quarter, and the figures from the INE and registars to follow suit a few months later. There will come a point when even the headlines agree that Spanish home sales are going one way.

The sales figures from the notaries are more timely, as they tell us how many transactions are actually completed with exchange of deeds and payment in the month, but they don’t give much detail beyond the number of sales, and they tend to be revised significantly for months afterwards, so you can’t be sure of the numbers when first published.

Sales figures from the INE offer more detail like a breakdown of sales by region, but lag the market by a a period of months because it takes time to go through the bureaucratic process of inscribing a sales deed in the Spanish Land Register. So the sales figures from the INE tell us almost nothing about the number of sales in the month they refer to, and only tell us how many sales previously completed were inscribed that month.

So when the numbers from the notaries go up or down, you can expect a similar change to show up in the INE’s figures a few months later.

Neither source tell us anything about the number of sales agreed between buyers and sellers in private contracts like the arras contract, or about off-plan sales agreements, all of which will take months, or even a year or more in the case of off-plan sales, to show up in the official figures.

Why are the monthly sales figures from the notaries always almost higher than the INE’s, when you would expect them to even out over time? Perhaps some sales are never inscribed in the Land Registry, as it’s an extra cost. It’s a bit of a mystery.