Spanish house price figures published in the last quarter of 2019

The SPI House Price Index Tracker plots the progress of the six most-watched house price indices in Spain, and brings them together in one chart.

Some of the indices are updated monthly and some quarterly with a long delay, which makes them harder to compare. This means the figures published each quarter don’t all correspond to the same period. Bearing that in mind, the following residential property price indices were updated in the last quarter of 2019 (all figures show latest year-on-year percentage change):

Country-wide house price indices don’t tell us what’s happening in local segments but they do help us understand where we are in the market cycle, in which local segments play a part. If the cycle is turning down, this will influence local markets. Right now the cycle is still in positive territory with all indices rising, though there are signs that Spanish house prices are starting to lose momentum.

The Registrars provide a chart showing how their index has evolved since 1994. It illustrates how Spanish house prices have been growing since 2013 but are still significantly below the peak year of 2007.

The Spanish property portal Idealista published some charts illustrating how asking prices have performed very differently across regions since the peak year of 2007. In Ibiza, for example (next chart), prices fell not very far and not very long in the years immediately after the bubble burst, and then surged upwards once the recovery began, ending 2019 almost 60% above the previous peak. In the Dalt Vila – La Marina district of the island’s capital, prices were 80% higher at the end of 2019 (green line in the chart below). 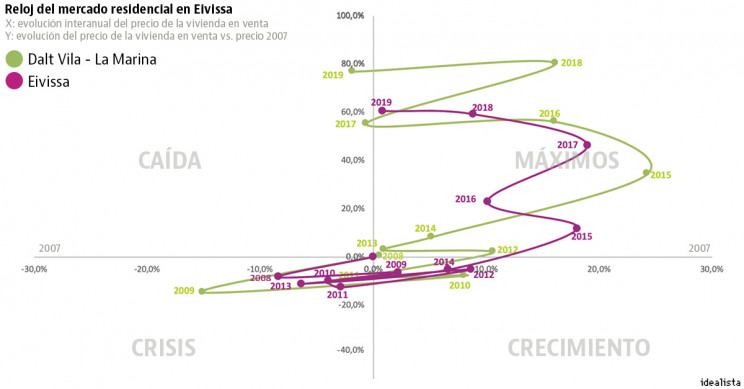 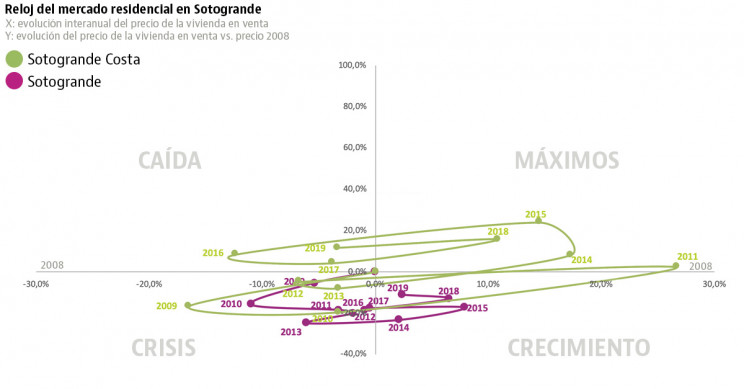 Appraisal-company Tinsa also break down their index (based on their valuations) by type of area such as cities, coasts, and islands. According to Tinsa, house prices in November were up an annualised 4.6% in big cities and provincial capitals, 0.3% on the Mediterranean coast, and 11.3% on the Balearic and Canary islands, where home sales are declining even as house prices rise.