With just a few days to go before the end of the year and the decade, here are the headwinds I see blowing in the face of the Spanish property market.

As we end a decade that started in a deep crisis with the Spanish property market all but imploding in 2010, I see more headwinds around now than at any time since the recovery started back around 2013. There are also some tailwinds losing force that I shall mention first.

Slowing economic growth. Spanish GDP grew by an annualised 2% in Q3, but is on a downward curve, as you can see from the chart below. A slowing economy means fewer new jobs, and less wealth around to spending on housing. That said, the economy is still growing, so this is not yet a headwind, more like a tailwind losing force. 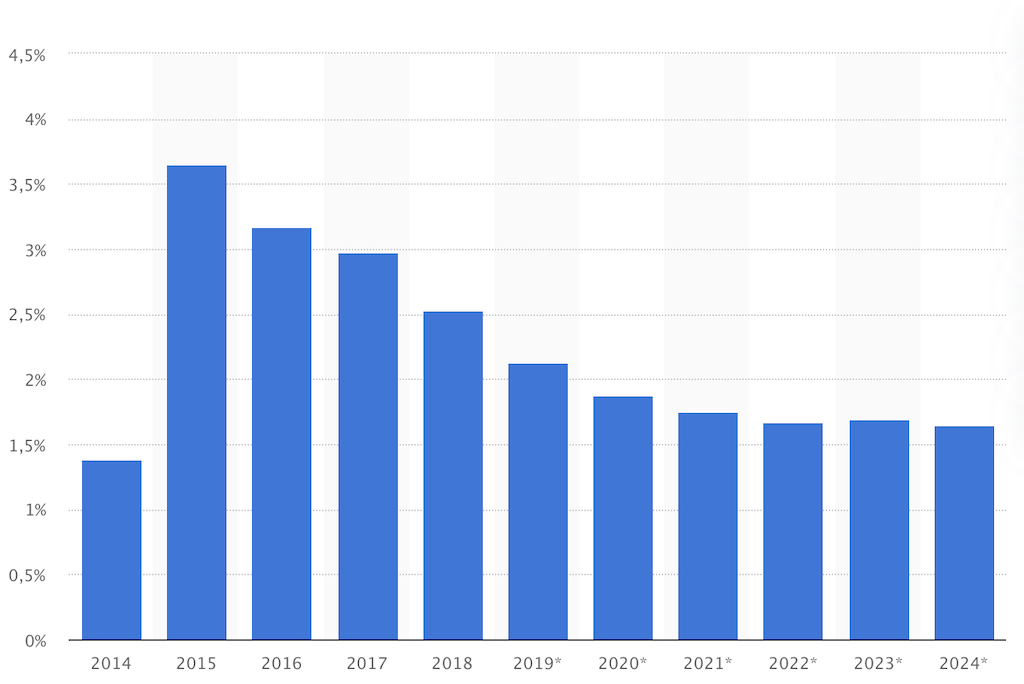 Unemployment is falling at a slower rate. The jobless rate in Spain peaked at over 26% in 2013 and fell to 13.92% in Q3. But as you can see from the chart below, the rate of decline appears to be slowing down, as you would expect with a slowdown in GDP growth. On the other hand, wage growth is still a reasonable 4%, leaving the average worker with a long term contract better off.

Population slowdown. Spain’s low birthrate, ageing population, and lower immigration levels means the population is barely growing, which is a kind of headwind for the economy and the housing market in general terms. True, the population has bounced back a bit after the decline of the crisis years, but with the fertility rate standing at 1.33 in 2019 and fewer immigrants than during the boom years, population growth is forecast to be negligible in 2020, and negative in the next deace. A smaller population means fewer families and less demand for housing.

Mortgage lending slowing down. Though interest rates are close to historic lows, new mortgage lending has been volatile of late, and might be showing signs of running out of steam. Figures from the INE show new lending down 30% in August and September, and 2% in October, whilst more timely figures from the notaries show lending growing again by 9.5% in September and 8.1% in October. Though much of the turbulence in the mortgage market might be due to a new law introduced this year intended to protect borrowers, there are reasons to think the period of steady growth in new mortgage lending has come to an end.

New housing starts on the wane. Planning approvals were down 14% in July, and confidence in the building sector is declining, according to a survey by the Government.

Political uncertainty. Spain has had four general elections in four years and still doesn’t have a government with a working majority in Madrid. It looks like the current caretaker government of Socialists led by Pedro Sanchéz will form a coalition with the hard-left Podemos party relying on support from Catalan nationalists, which would mean a more leftwing and unstable government, hardly good for the economy. The political conflict in Catalonia is also destabilising the whole country. There’s a reasonable chance that negotiations over the next government will break down leading to another general election next year that fails to break the impasse, and so on. The political moshing between left, right and restive regions like Catalonia creates uncertainty that isn’t great for the economy, and is a turn off for foreign investors.

Political interference in the housing market. As Spain is going through a political period drifting towards the left, expect more interference in the housing market, for example with rent controls and restrictions on holiday-rentals. In Catalonia a new decree will help squatters at the expense of landlords, and impose a 40% social housing quota on all new developments in Barcelona. Political interference could have unintended consequences like a fall in the supply of homes for rent and new homes for sale, putting upward pressure on housing costs, thus making it a headwind that delivers higher returns. But political interference is also a turn off for investors, especially foreign investors, and on balance will probably be a headwind for the market in 2020.

Fewer local and foreign buyers around. The latest figures for October clearly show the Spanish property market going through a period of weaker demand, and figures from the Registrars for Q3 reveal that foreign buyers were down 5% and local buyers down 8.5%.

Oversupply in some areas. It’s difficult to quantify but some experts think that the market is now over-supplied with new homes in places like the Costa del Sol, where new home buyers pay a premium that is not easy to justify. Any signs of trouble selling new projects in some segments will not be good for confidence.

Higher house prices. Spanish house prices have been rising for the last few years, though recently it looks like prices have lost momentum. But in areas with strong demand, like the big cities and most popular resort areas, prices have risen to a level that no longer looks like a steal, so the bargain argument for buying in Spain is not as strong as it was, especially for foreign buyers. When you throw in transaction costs, bureaucracy, and the lack of professionalism in the sector, buying a home in Spain is no longer such an attractive proposition at this price, though it does depend on your segment.

Brexit. Though significantly reduced, the British are still the biggest group of foreign buyers in Spain. It looks like Brexit has reduced British demand since the referendum, but now we know that the UK is definitely leaving under a Conservative government, will that be good or bad for British demand? In the short run the high level of uncertainty around what Brexit actually means will probably be unhelpful, so I think Brexit will continue to be a headwind for now.

It seems to me we are heading into a new decade headwinds gathering, and tailwinds losing force. But when you consider how bad the market was this time a decade ago, in the crater of the Spanish property crash, things are a lot better now, and we can feel much more confident about the market than we did back then. Headwinds might hold the market back, but that’s nothing compared to a crash.