A sizeable chunk of British demand for property in Spain comes from expats who have relocated to Spain, so I’ve been looking at the change in the officially resident expat population in recent years. I’ve also taken a look at expat communities from other countries that tend to move in the same market segments as the British.

But not all expats have the same impact on the property market. Economic migrants like Moroccans, Chinese, and Pakistanis, to name a few of the biggest groups, tend to rent or buy in urban areas where homes are relatively cheap. Many are working age with young families.

Lifestyle migrants predominantly from northern European countries like the UK, Germany, The Netherlands, and France, tend to buy more than economic migrants, and focus on coastal resort areas with much larger budgets. Many are retired empty-nesters. They provide the bulk of expat demand for homes in Spain’s best known resort towns and areas like the Costa del Sol, Costa Blanca, and the Balearic and Canary islands.

As you can see from the chart above (blue line), the overall foreign population in Spain has been growing in the last two years since bottoming out in 2017 at 4.6m, but is still down 13% since 2011, when it reached 5.6m. That big decline hasn’t helped Spain’s public finances.

Northern European and USA expat communities all tend to move in broadly the same housing market segments, in contrast to economic migrants. With the exception of the USA ,which has been growing steadily since 2007, all show a similar curve down from a peak around the years 2011 – 2013, bottoming out in 2017, and growing softly in the last two years. It helps to look the biggest four expat communities on a different chart (first chart) from the others (second), which would otherwise be dwarfed. The British decline between 2012 and 2017 is by far the most pronounced, and had little to do with Brexit. 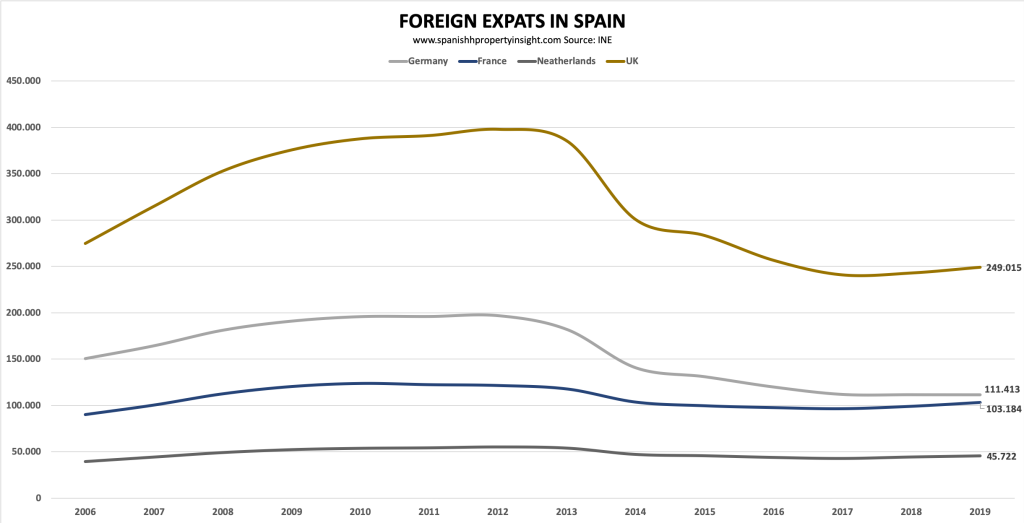 Almost 50% of British expats live in the two provinces of Alicante (Costa Blanca) and Málaga (Costa del Sol). The provincial breakdown is not available for 2019 but the numbers for 2018 show the Alicante-based community starting to grow again, as it did in Almeria, Cádiz, Madrid, Murcia, Las Palmas, Sevilla, and Valencia, though not in Malaga.

What factors help explain the decline in expat numbers in Spain?

I seem to remember there was an effort a few years ago to clean up the municipal register as some Government spending is based on it. That might have reduced the officially resident expat population for all nationalities, though I don’t know how much. And there are, of course, a lot of expats who might be considered resident in Spain but who choose to stay off the radar for tax reasons.

Given that the big decline in European expat communities took place between 2012 and 2014, I assume that one of the factors driving the decline was the introduction of onerous Modelo 720 worldwide asset declaration form in 2012. Many people have told me this is one of the main reasons why they have decided not to live in Spain, so I assume this factor is reflected in these numbers. The Modelo 720 declaration, which looks suspiciously like a cynical ploy by the Spanish tax authorities to grab wealth from expats, is a mind-bogglingly stupid obligation that leaves the country worse off. Spain would attract more expats and tax revenues without it.

It seems that Brexit has had little noticeable impact on the number of British expats in Spain, which declined most years before the referendum in 2016, bottomed out in 2017, and started growing again in 2018 and 2019. You could argue that Brexit has modestly increased the British community in Spain since 2017, and with it the number of potential home buyers. Figures from the Association of Land Registrars of Spain also show a slight increase in Spanish home acquisitions by British buyers in 2018 (chart below). Perhaps that’s partly driven by Brits looking for home in a European sanctuary after Brexit. 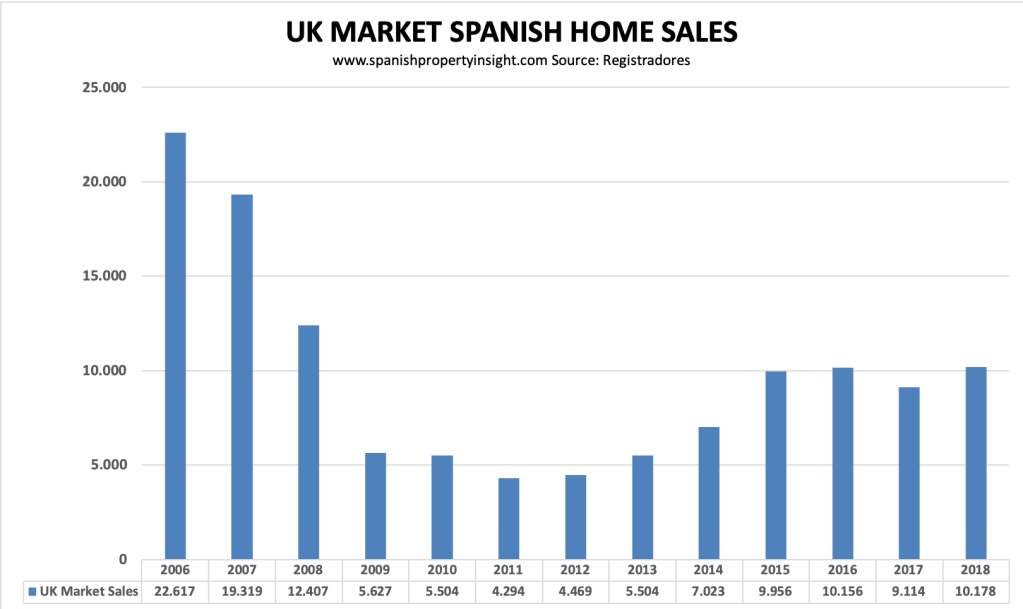