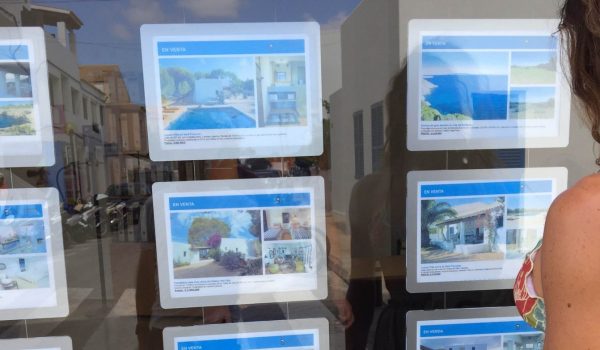 I thought the UK’s vote to abandon the EU would crush British demand for property in Spain. I was wrong.

Reliable numbers (by Spanish standards) from both the Association of Spanish Notaries, and the Spanish Land Registrars Association, show the growth in the number of homes bought by British investors started to go soft in the first half of 2016 as the June referendum approached, then lurched down in the second half of 2016 following the surprising result to leave the EU, only to start recovering in 2017.

The following charts illustrate the impact of the Brexit referendum on British demand for homes in Spain.

First of all half-yearly demand going back to 2007 using figures from the notaries.

Figures from the Registrars tell a similar story, though their figures are given on a quarterly basis, and lag the market by a month or two. 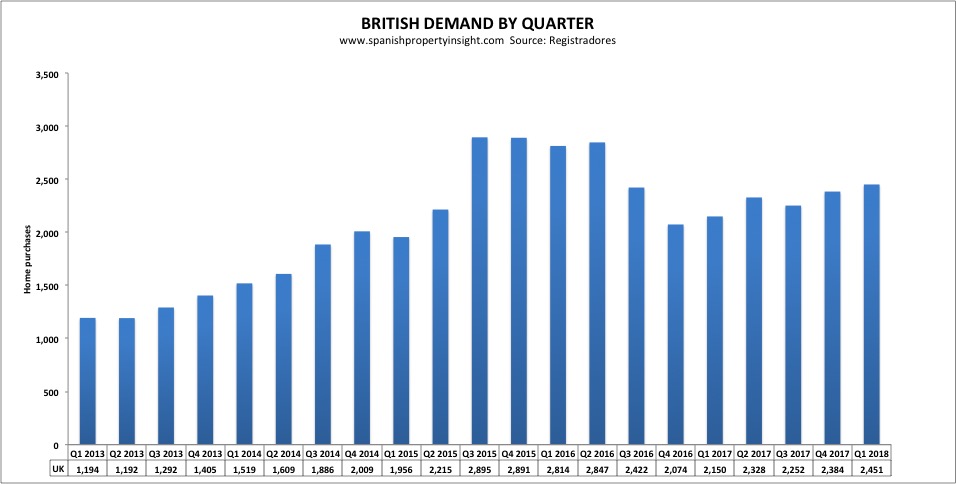 Both sets of data show that British demand for property in Spain has been negatively affected by Brexit, but nothing like the impact of the financial crisis, and by the second half of last year demand was back to the fifth highest level in a decade, and growing.

Another way of looking at it is between the second half of 2015 and 2016 the British market shrank 24%, but by the end of 2017 the market was only 18% smaller in volume terms than it had been before Brexit. That’s a significant decline, but nothing like as bad as I was expecting (think 50% or more taking us back to the levels of 2009 to 2013), and still leaves the British market the biggest in Spain by a wide margin, with around 15% market share.

Spending by British buyers in Spain

Another surprising thing to emerge from the latest figures is the negligible impact Brexit has had on British budgets, at least on average. Feedback from my network of the trustworthy estate agents and developers around Spain suggested that the middle market between €200,000 and €400,000 had been hit hard, causing motivated buyers to simply reduce their budgets, whilst wealthy buyers with financial resources looking above €500,000 were relatively unscathed. However, as the next two charts illustrate, average British budgets in terms of €/m2 dipped slightly in 2016 before rising again in 2017, and ending the year above where they were before Brexit. They are, however, still around 25% lower than they were in the boom years.

In the second half of last year the British were the number one or two group of second home (non-resident) buyers in nine out of Spain’s autonomous regions (followed by the French in seven), and number one in Andalusia, Murcia, the Valencia Community, Castilla La-Mancha, and Asturias in the north. The were the biggest group of resident buyers in Andalusia and the Valencian Community, and number two in Murcia. Brexit or not, the British continue to dominate most key regions.

What drives British demand for property in Spain? There are various factors such as lifestyle, and investment considerations that arguably leave Spain looking even more attractive in the light of Brexit, plus access, residency rights and fiscal questions, all of which might be trickier after Brexit (depending on the tedious negotiations underway). But one obvious driver is the strength of the pound that determines British purchasing power in Spain. The next chart compares British demand for property in Spain with the GBPEUR exchange rate showing a clear correlation, as you would expect.

But once again I have to confess that British demand has turned out to be more resilient in the face of a plunge in the strength of the Pound than I expected. The last time the Pound was this weak was in the years between 2009 and 2013, whilst British home acquisitions in Spain are still more than double the level of those years. So British buyers are less price sensitive and more motivated than I expected. If the Pound now gets stronger against the Euro as a consequence of populism and instability in Italy – the common currency’s soft underbelly – then I won’t be surprised if we see another wave of British investors heading for Spain’s sunny shores.

Market insight from the front line

So much for the data, what’s happening on the front line? I asked Conor Wilde, head of Found Valencia, one of my trusted agents in Spain, for his impression of British demand in the light of Brexit. His comments are in line with what I have heard from others, but not easy to reconcile them with the data.

Although Valencia City and its immediate surroundings are seeing a stable increases in both prices and international demand from an ever-more global market, our experience at Found Valencia has been a significant decrease in British demand since the Brexit referendum.

We have seen a decrease of 65-70% in UK buyers, which is also evident in our analytics regarding online traffic and conversion rates from our UK marketing activity.

Across the winter months to February of this year, the biggest decrease we noticed has been in Villa properties from 230.000€ to 370.000€ from UK buyers wanting to relocate for full time living in Valencia. Valencia City apartment (2/3 bed,110m2) interest from UK buyers had also decreased since Brexit.

Holiday home buyers continue to research the areas as Valencia still offers excellent value for money, but as can be expected, many buyers wanting to take that step are awaiting the final outcome of Brexit.

The same cannot be said of foreign buyers from other markets. International demand for property in Valencia City and surroundings is more diversified than ever, and growing strongly.

That said, we are starting to see the first signs of life returning to the British market. In the last couple of months, since the end of February / March of this year, we are attending to more UK buyers wanting a bolt hole in Valencia for holiday use. Maybe this is the start of renewed interest in this city, or perhaps it has something to do with the political problems in Barcelona driving British buyers our way. It’s still too early to talk of a reliable recovery in British demand, but certainly from March of this year we are starting to see more activity on the ground with our sales agents with UK clients. If many British buyers are holding off, some are starting to buy again as they get fed up putting their lives on hold.

Conor also explained what British buyers are looking for.

We have certainly seen an increase for our high end properties or clients wanting to build with us in the past 2 months (Golden Visa clients from outside the eurozone) for full relocation to Valencia, and year on year buyers are getting younger as the internet fuels digital commuting. 2 bedroom city apartments from 250.000€ – 400.000€ are our best sellers.