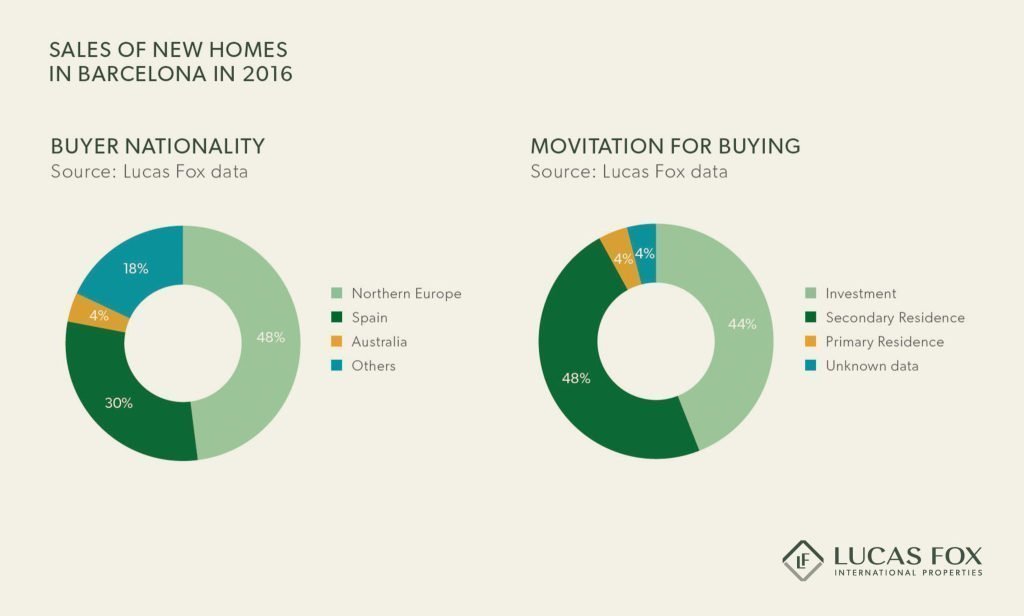 Demand for new homes in the Catalan Capital has almost doubled in 2017 with foreign buyers playing a key role, according to Barcelona-based Lucas Fox, an international estate agency (based on their sales figures).

Lucas Fox sold just under 100 million Euros of new homes in Barcelona last year, with an average price of just over €900,000, the company reveals.

Just under 50% of Lucas Fox sales in 2016 in Barcelona were new or newly renovated homes. 70% of buyers were from overseas, the vast majority from Northern Europe. 44% purchased for investment reasons and 48% bought homes as a second residence.

During 2017, Lucas Fox forecasts an increase in the number of mid-priced homes coming onto the market thanks to a pipeline of larger developments currently underway offering smaller units.

Lucas Fox says it will be adding more than 1,000 new homes for sale to its Barcelona New Developments portfolio in the course 2017, on the back of which the company expects to generate sales of up to €550 million catering to strong demand for quality new homes in prime areas

Lucas Fox’s portfolio of new homes for sale are mainly located in the central areas of the Eixample, Barcelona’s Old Town, and the up-and-coming Poble Nou beachfront, all districts popular with overseas investors.

“2016 was a pivotal year for Lucas Fox’s Barcelona New Development division,” says the company’s Head of New Developments Joanna Papis “The rhythm of sales in 2017 is already nearly double that of last year, as demand for new and newly renovated homes continues to grow, particularly from foreign buyers.”

Barcelona’s investment potential is a big part of the story, the company claims. “The combination of rental yields of up to 5.5%, and off-plan new development projects offering as much as 20% capital growth through the construction process, is increasingly attractive to international investors looking for an alternative to more traditional property investment locations and the financial markets,” says Papis. “Not only are these homes perfect rental investments, but they also attract non-EU buyers looking to take advantage of the Spanish Golden Visa residency scheme. Our prediction is that sales in these developments will continue to make up a high percentage of the mid-market transactions involving foreign buyers”.