Spanish mortgages now some of the cheapest in Eurozone

Spain has gone from being one of the most expensive countries in the Eurozone to get a mortgage, to one of the cheapest in the space of a few years, reports the Spanish daily El Mundo.

Just a few years ago, Spanish banks were not interested in lending mortgages, as was clear from the high differentials of four per cent or more they were charging at the time. Their lending conditions were more attractive for clients taking one of their repossessed homes of their hands, but otherwise the message was clear: We are not keen to lend.

Now lenders are falling over themselves to offer some of the cheapest rates in the Eurozone to creditworthy clients. There are fixed-rate mortgages to be had from as low as 2.05%, and in August the dutch bank ING launched its ‘Orange Mortgage’ with a differential of just 0.99% above Euribor.

As a result of these highly competitive Spanish mortgage conditions, Spain is now one of the cheapest countries to borrow in the Eurozone, reveals El Mundo. Using data from the European Central Bank (ECB), El Mundo show that the average loan in the Eurozone has an interest rate of 2.22%, whilst the average interest rate in Spain is now 2.12%, below France (2.15%), Portugal (2.26%) and Italy (2.48%), and almost as cheap as Germany (2%).

Cheaper lending is a boon for home buyers who need finance, but voices are starting to warn of the risks of a mortgage price war. Both Bankinter and Banco Sabadell have voiced concerns in recent weeks.

Interest rates are abnormally low today, and will have to rise in future, which is bound to put some borrowers under pressure in future. Lenders, meanwhile, are starting to offer loss-making mortgages, which Banco Sabadell describes as “unsustainable.”

Anyway, Spanish banks are still working off the hangover from their last binge of cheap mortgage lending, warn Bankinter, a mid-sized bank. Maria Dolores Dancausa, MD of Bankinter, recently said out that cheap mortgages granted in the boom “still weigh like a stone on bank balance sheets.”

For further reading there is a new article by Bloomberg (Even Spain’s Mortgage Market Is Rising Again as ECB Injects Cash) that helps explain why Spanish mortgages are getting cheaper, including this chart that shows how both Euribor and bank differentials (spreads) are falling. 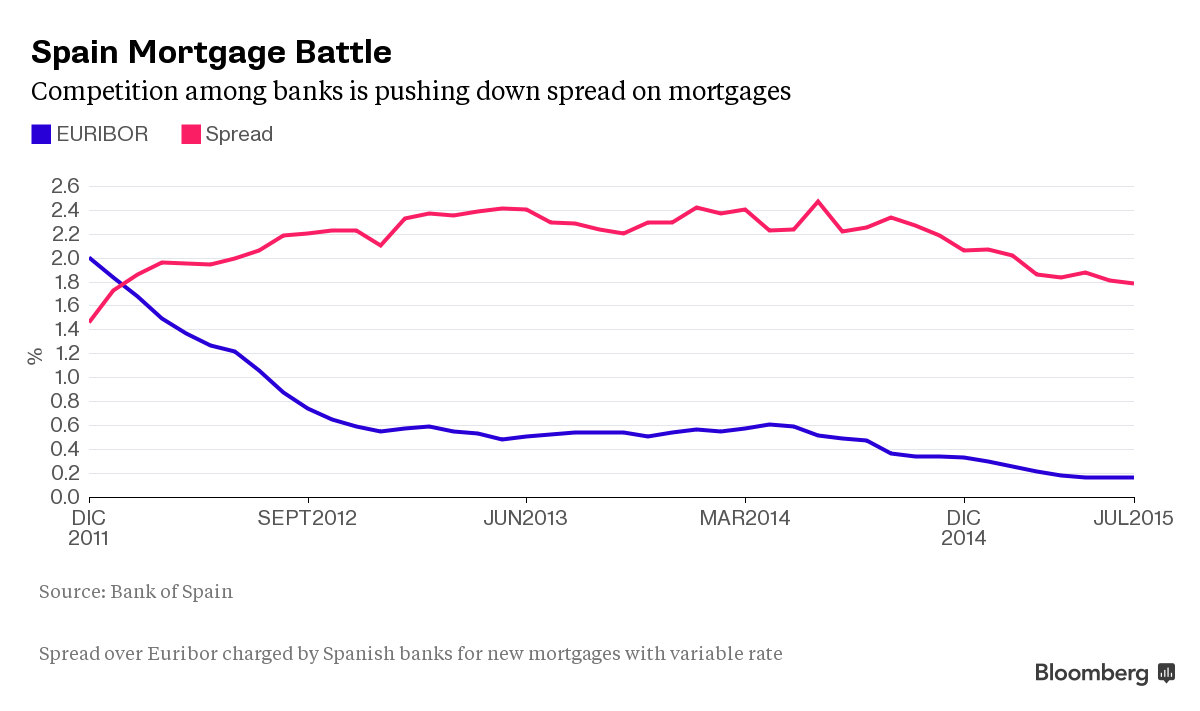