Foreigners buying property in Spain were more important to the Spanish housing market than ever in 2014, led by the British.

Foreigners bought 13 per cent of all the homes sold in Spain last year, according to the latest market report from the property registrars.

Of the 318,928 home sales registered in the property register last year, 41,493 were purchased by foreigners, led by the British, who snapped up 7,023 residential properties in Spain in 2014.

Foreign demand as a share of the overall market crept up each quarter as the year progressed, continuing a trend of growing foreign market share that started back in 2010. In Q4 foreign demand was a record 13.88 per cent of the Spanish housing market, up from a low of 4.2 per cent in 2009.

The registrars see growing foreign market share as a vote of confidence in Spanish property as an investment and lifestyle choice. “This strength demonstrates an enormous confidence in the Spanish residential property market,” explains the registrars’ report. “ Not only as an attractive tourist destination, which it has traditionally been, but also, on this occasion, as an excellent opportunity as a consequence of the level of prices in the last few years.”

Spain should thank foreign investors for mitigating the effects of the housing bust and setting the scene for some sort of housing market recovery, at least prime areas of the main cities and the coast.

This foreign demand for housing in Spain brings money into the country, and helps the country clean up its balance sheet. We are still a long way from sorting out the housing market crisis, but it’s safe to say Spain would be in worse trouble without the help of foreign property investors.

As the registrars point out, foreign demand has been “without doubt one of the variables contributing the most to the recovery of the Spanish property market, in the way it garantias a volume of demand for housing above 10,000 units every quarter, and more than 40,000 homes annually.”

How does foreign demand break down by nationality? The following charts answer that question for different periods over the last few years: 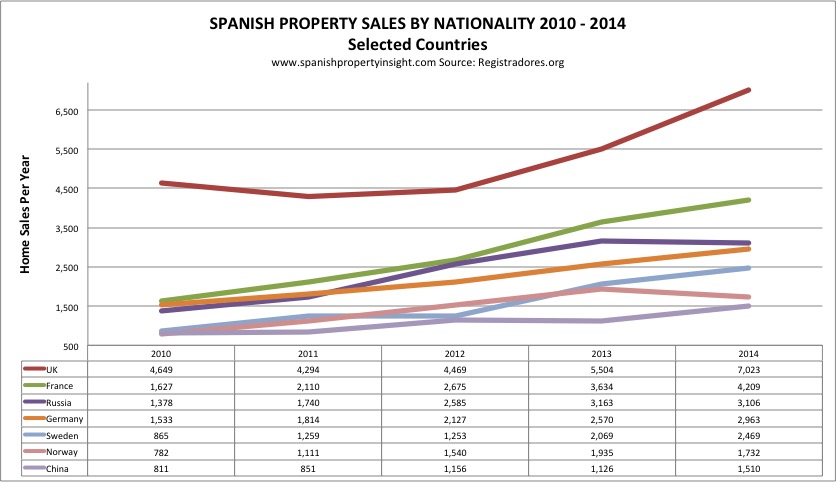 The national mix of foreign demand has stayed fairly constant over the years, which the registrars see a sign of customer satisfaction and vote of confidence. “This fact offers an outstanding sign of confidence,” they argue, on the grounds that once certain nationalities start buying in Spain, they keep coming back. “Once they have opted for the Spanish property market,” explain the registrars, different nationalities “tend to maintain their level of demand.”

But, As you can see from the last chart, British demand took off in 2014.

Back in the boom years, British demand was around 30 per cent of foreign demand, but then fell steadily as boom turned to bust, Spanish house prices crashed, and Pound Sterling plunged 25 per cent against the Euro.

As recently as 2010 British demand was 23 per cent of the foreign market, falling steadily to a low of 15 per cent in 2013 ( though still the biggest group by a wide margin), before bouncing back to 17 per cent last year.

Though British market share has fallen by half since the boom, buyers from the UK are still the biggest group by a wide margin in volume terms, way ahead of the French in second place (17% vs. 10%). So more than any other nationality, changes in British demand have a big impact on the Spanish housing market and economy.

For example, British buyers were responsible for 65 per cent of the growth in foreign sales between the first quarter and the last quarter of the year. If this trend continues, expect to see increasing domination by British buyers.

British investors have always had the biggest appetite for Spanish property, but the Pound-Euro exchange rate is the throttle that determines how much of that appetite turns into sales.

The Pound is currently at a five year high against the Euro, up 14 per cent over 12 months, and only around 5 per cent shy of its boom-time level around 1.5 Euro to the Pound. Coupled with a Spanish house price crash, and surging property prices in the UK, a second home in Spain is starting to look cheap again to British buyers. Pity the poor folk still trying to sell and repatriate pounds to the UK.

With the German economy still humming along, and events in Greece and the Middle East turning German buyers off those destinations, Spain is likely to be the main beneficiary. We may see German buyers gaining market share in coming quarters.

Back in 2012 Russian buyers were 10 per cent of the foreign market, and even beat the French to second place behind the British in one or two quarters. However, since then it’s been downhill for Russian demand, which slipped into sixth place with 5.83 per cent market share in Q4 last year. Events in Ukraine and the collapse in the Russian Rouble are obviously part of the story. On the one hand you would expect more Russians than ever to want to get their wealth out of Russia, but on the other the purchasing power abroad of the average Russian is in freefall. The way things are going, it’s reasonable to expect Russian demand to keep declining.

The registrars argue that foreigners “see this as without doubt a good moment to buy a home in Spain, and they are taking advantage of it quarter after quarter.”

That is certainly true, but it is also true that a big part of the reason why foreign market share is now at record levels is because of the collapse in local demand, which is hardly good news.

Nevertheless, with Spanish house prices still declining in many areas on the coast (though no longer in prime areas like Barcelona, Marbella, and Ibiza), and the British pound rapidly appreciating against the Euro, it’s reasonable to expect foreign demand to continue growing this year, and gaining market share if Spanish demand fails to pick up.