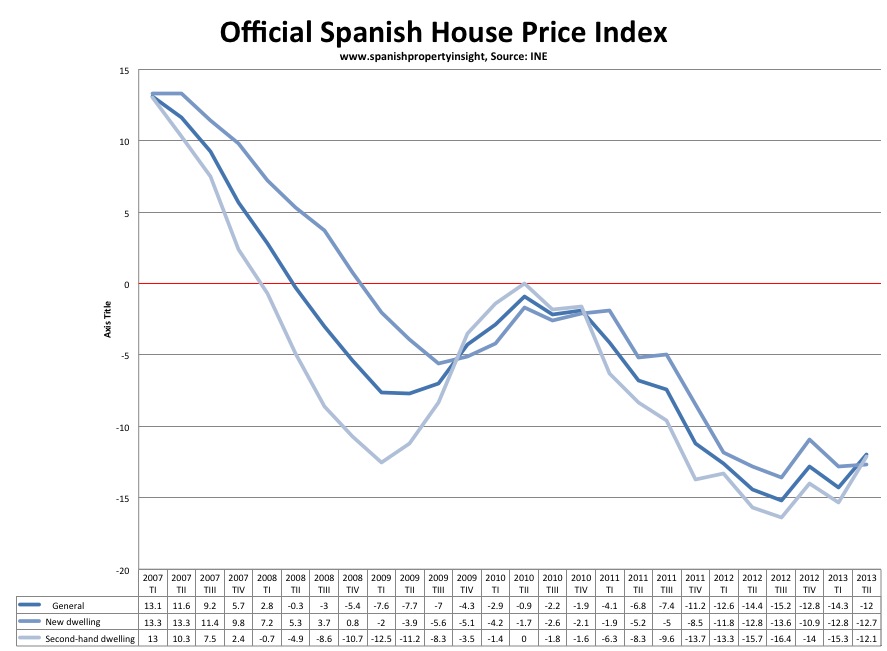 The official House Price Index published by the National Institute of Statistics (INE) shows that Spain is now into its fifth consecutive year of falling house prices.

Spanish house prices fell 12pc over 12 months to the end of June, according to the latest figures from the NIE. Peak (2007) to present, prices are down 36pc.

In Q2 resale prices fell 12.1pc compared to 12.7pc for new build prices. Double-digit house price falls in both categories have been the order of the day since the beginning of 2012.

However, as you can see from the graph above, it looks like the rate of decline has bottomed out, having hit -15.2pc in Q3 of last year.

What next? I expect average house prices to continue falling for at least the next year, maybe two years, but at a declining rate as time goes by. Annualised double-digit price falls each quarter should be a thing of the past by Q2 of 2014, after which will come the long climb back to positive territory. That could take several years yet.

Lower house prices are good news for buyers, but only those with access to finance. With mortgage lending hitting new depths, most Spaniards are unable to take advantage of lower house prices. The biggest beneficiaries, based on the latest statistics showing a surge in foreigners buying homes in Spain, are cash buyers from abroad snapping up bargains on the Spanish coast.