The coronavirus crisis is turning the Spanish economy from hero to zero as the IMF forecasts a contraction of almost 13% in 2020, considerably worse than the EU average.

Things were going relatively well before the pandemic. The Spanish economy grew by 2% in 2019, more than the EU average (+1.3%), and the UK (+1.4%), and close to the US (+2.3%) where Trumpian economics was boosting the economy in the short term with a view to his re-election. Spain’s economy has been growing faster than those of its neighbours for several years, giving the impression to global finance that Spanish assets are a sound investment. That was all good news for the Spanish property market.

The Covid-19 pandemic has hit Spain harder than most because of its reliance on tourism, and pushed Spain from the top of EU growth rankings to almost the bottom, along with poor old Italy. The IMF’s growth forecasts for Spain have been downgraded from -8% in April to -12.8% now, and who’s to say it won’t be downgraded again in the next few months.

The coronavirus crisis, and in particular the economic lock-down response, is proving catastrophic for economic growth all over the world, though some countries and regions are forecast to pay a higher price than others, at least according to the IMF. The US economy is forecast to contract 8%, Japan 5.8%, the UK 10.2%, and Germany 7.8%. Only China, which exported the virus to the rest of the world, is forecast to avoid a contraction this year, with growth of 1%. And as you can see from the image below, which compares IMF forecasts in April and June (left chart), advanced economies, including Spain, are going to have a mountain of public debt to deal with in the aftermath of the pandemic (right chart), which surely means higher taxes, or higher inflation, or both. 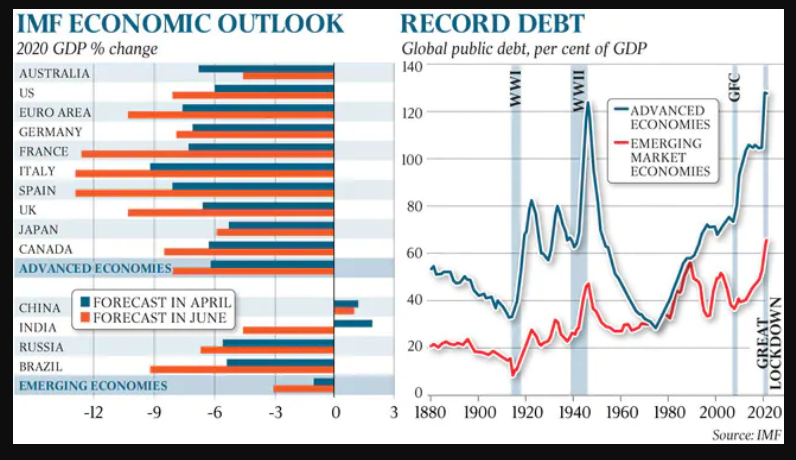 On the bright side, the IMF forecast the rebound in growth will come in 2021, and Spain is forecast to do slightly better than the EU average, with growth of 6.3%. But that would still leave the Spanish economy considerably smaller than it was before the pandemic, with much higher unemployment, many households in financial difficulty, and public finances in tatters.

At a time like this, the country could do with a really sound government taking bold measures to get the economy moving, and confidence rising, yet Spain is deeply divided along ideological and regional lines, and Spanish politics looks like a part of the problem, not a part of the solution.

So we just have to hope that Spain can muddle through until the virus is beaten, and the pillars of the Spanish economy like tourism are rebuilt. But it’s going to be a painful period for almost everyone, and I can’t see how the housing market gets to avoid the pain. I expect that all segments of the housing market will suffer, but as usual in a crisis, the prime segment will suffer the least.