Home-building boom on the Costa del Sol, but is it sustainable?

I’m waiting and waiting for a gap in the traffic so that I can pull out onto the A7 coastal highway that links up all the main towns and cities from Malaga to Sotogrande, including Marbella and Estepona. Where is all this traffic coming from and where is it all going? This is the end of November, for goodness sake. There shouldn’t be anybody here. They can’t all be golfers, though the courses are certainly full at present. No, there are far too many white vans, concrete delivery trucks, and containers around. This is business, principally construction business, and it looks like it’s going to be the new norm all year round, and not just in the warm tourist season. The Costa del Sol (Sunshine Coast) is increasingly becoming the Ciudad del Sol (Sunshine City).

On the skyline to East and West, cranes once again bristle above urbanisation and villa developments. The building consultants, professionals and tradesmen who were laid off 10 years ago are now flooding back and completing shell buildings that have been abandoned for years, or building anew on sites that developers who survived were able to hold onto, or have acquired cheaply from the banks. Some of the banks, of course, are partnering with developers in these projects and, just as after previous recessions, their ‘prudence’ in holding onto ‘called in’ securities will be rewarded by profits on the new development. Conveniently, the crisis and bail out is fading from corporate memory.

Concerned that all this development might be speculative and always wondering, “are these places just being built speculatively or are ‘real’ people buying them?”, Survey Spain have carried out research on a 1,000-hectare area centred around La Resina on Estepona’s New Golden Mile (36.465385 -5.075497) shown on this map.

The area stretches from the AP7 toll road to the sea and is bounded to the east excluding Cancelada and Los Flamingos, and to the west by the road up to Selwo Safari Park. Within and on the fringe of that area, our research identified at least 26 new developments, and that’s excluding private new build single villas. Is this the start of a second Nueva Andalucia? Travelling along the coast as we do, this is by no means exceptional, and even in Marbella, with its planning restrictions, there are many more cranes than there were a year ago.

Within La Resinera there are various stages of construction, from ‘greenfield’ to ‘fitting out’, but all are active with sites staked out and security fences at least, and many with the marketing office in place and the brochures on display. Which begs the question, is it all a marketing drive to draw speculative buyers in, for those with little memory of the last 15 years of so? “These prices cannot be sustained, so buy somewhere you like and not just for investment”, I was told when looking for a home in 2002. But, up and up went the prices until the whole world’s financial bubble burst in 2007 and prices crashed to lower than those seen at the turn of the century.

Now, as Survey Spain carry out market research for valuations, we find that there are two markets. There is the new homes market, sold by developers with marketing departments and ‘advantageous’ mortgages behind them; and there is the resale market, where all the people who bought in the past are struggling to achieve 70% of the new market prices. This is for all property types such as apartments, townhouses and villas, and is even the case where resales have been improved by their current owners with many additional features, and even if resales have been ‘snagged’ of all the inevitable minor defects that can be found in a new property. Yes, there are some exceptions in the prime areas, where resale property prices are rising, but that just tends to bring more resales onto the market, reducing the upward pressure.

So back to La Resinera. Is there really enough real demand to merit all this construction, or are some big mistakes being made? In their market research, did developers and investors take into account so much competition in the same area, all at the same time? Perhaps not. However, reports from a majority of the sales offices have shown that 60+% plus of new homes in our study area have been ‘sold’ off-plan or while under construction, at prices significantly higher than existing resale properties in the area, so the demand is there, though it’s not yet clear how much of it is speculative, and how much of it is real. Buyers are coming from a variety of countries, with many being Spanish, but Belgian and French also being prominently talked about. The Nordic countries also feature strongly, though perhaps that interest is beginning to slow as their limited population approaches ‘saturation’ with holiday homes in the sun.

So long as this market is sustainable, a booming new home business is good news for the Costa del Sol, bringing investment into the area and welcome jobs for the many tradesmen and professionals who have been scratching a living or on the ‘paro’ (dole) for the last few years. There are smiles on faces in the restaurants and shops in the area as they are the first beneficiaries of this ‘trickle-down’ of wages into the local economy.

But even if the market cycle is healthy this time around, booms never last forever, so “build quickly and get final payments from the buyers”, is my advice to the constructors, developers and financiers in the business today. This boom, like all others before it, will one day run out of steam.

Furthermore, thanks to quantitative easing, the world today is awash with speculative money looking for a home, and it could be finding one in these developments. Food for thought.

What happens if many of the buyers on these projects prove to be speculators, hoping to sell at a profit when the property is finished? They will find themselves trying to sell into a resale market where prices can easily be 30% below what they have paid. In addition, there are the high costs of purchase and sale, which combined can add on another 20% or more, and have to be recouped before profit can be made. Profit is possible, if prices rise on the back of sustained demand for housing, not just speculation. But which new market is going to provide the buyers? With the fall in the pound, the UK buyers are finding Spain increasingly expensive. The real Brexit effect, on the UK and the whole European economy, has still to be felt. It is similar for many of the Scandinavian countries that have seen relative falls in the strength of their currency with the euro. Eastern European, Arab, or Chinese have been mentioned, but let’s get real. Those with the money to invest will get better returns in other global markets than locking their funds into long-term bricks and mortar in Spain.

When that reality strikes, is there going to be another crash of speculative buyers deciding to abandon their deposits and walk away, leaving developers and their financial supporters with significant debts and the Costa del Sol with more incomplete shell buildings? All the financial pundits predict that the current quantitative easing funded graph cannot continue forever upwards and there must be another reckoning with reality, which will significantly reduce demand, and cause prices to fall. Looking at history, this is rarely a gradual thing, but is a collapse and with the faster decision-making that AI can bring, perhaps it’s something that will happen over a matter of minutes or hours rather than the months that we’ve seen in the past.

But enough ruminating over potential risks for investors. No matter what happens in the rollercoasters of financial ‘life’, we can still enjoy the real life of sun, food and people watching, for which Costa del Sol is so famous. 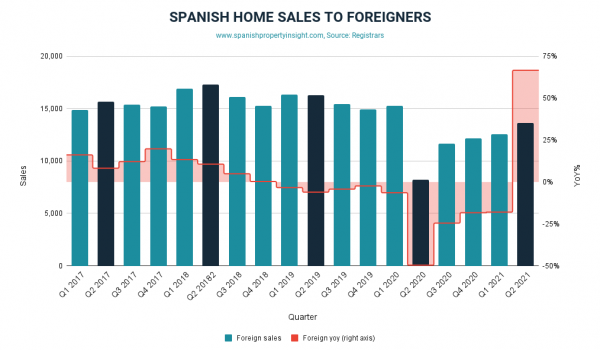 Foreign demand in Q2 2021: Slow recovery in the face of Covid and Brexit