One of my priorities in renovating a flat in Barcelona is to ensure the best possible thermal and acoustic insulation for peace and quiet at night, and to save money on heating bills.

Spain is a noisy country with a pleasant climate (at least on the Mediterranean coast and islands), and I guess there is a link between the two. The pleasant climate makes it easy to enjoy life outdoors, so Spaniards grow up surrounded by noise from others, and it doesn’t seem to bother them. But it does bother me. I grew up well-insulated from noise, and just can’t get used to the sounds coming from neighbours at night. It always amazes me how my Spanish family can sleep through noise of neighbours talking, walking around, and watching TV late at night.

The pleasant climate on the coast and islands also means that thermal insulation has never been a big priority when it comes to building homes. Why bother with the expense of thermal insulation if it never gets very cold? But good thermal insulation in a city like Barcelona means you rarely have put the heating on (and don’t get so hot in summer either). Thermal and acoustic insulation are related, and what comes as standard in Spain is not good enough for me.

If anything these bricks are great conduits of sound, so you can hear everything going on next door (and I’ve heard it all). As Chris says in the forum “Don’t talk to me about Spanish bricks. Horrible little skinny things full of holes”.

Noise pollution is not such a problem between buildings, as there are two load-bearing walls and a cavity between. Even so I often hear noise coming from neighbouring buildings, like dogs barking, people walking and talking, and TVs blaring late at night (from a deaf old neighbour who sleeps with the TV on). One hellish weekend about 10 years ago a Dutch hockey team of young lads rented a tourist apartment in the building next door, and practised their ball skills all night whilst partying hard. I lay in bed boiling with rage, and didn’t get a wink of sleep for two nights. I can’t stop what goes on next door, but I can do something to reduce the amount of noise that comes through the walls.

And of course there is noise from the street. My flat is on Bruc, which is a quiet street with light traffic that goes downhill, which makes a big difference as scooters and cars don’t have to rev up so much going downhill. Traffic noise on up streets is much worse. Even so, there is a murmur of noise coming from the street at night, whether your street goes up or down or sideways.

So my goal is to get as close as possible to blissful silence at night without totally blowing my budget, and hardly ever have to put the heating on. I also have an eye on fire-safety, as good insulation reduces the risk of fire spreading.

To achieve all this I’m putting a layer of high-density acoustic membrane (Membrana Acústica Danosa) against all the exterior walls. This is a type of heavy, soundproofing material with a bitumen laminate that works to block noise. On top of this I’m putting a layer of fire-resistant rockwool that also blocks noise and thermal transmission, and finally comes high-density plasterboard, on top of which will go another layer or plaster, followed by paint or wallpaper (design choices to come). For fire-safety I would have prefered not to use a bitumen laminated material against the exterior walls, but I’m told that it’s not a problem given the other measures put in place like the rockwool that goes on top. 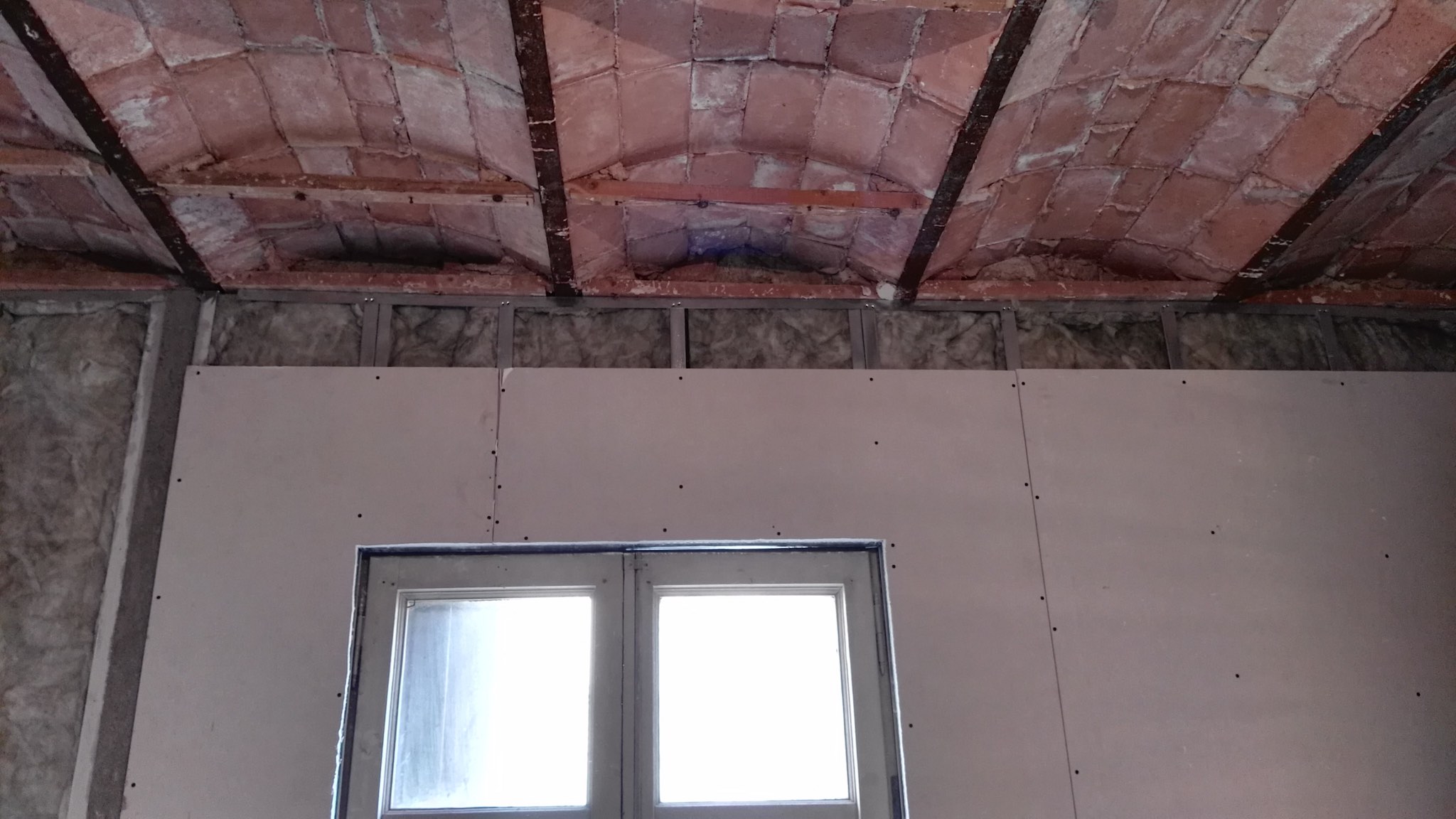 Obviously this all comes at a cost, and it drives up my budget, but everyone has their priorities, and you pay more for what’s important to you. I want peace and quiet at night, and also hope to save money on heating bills. I guess I’m also doing my bit for the environment…

The windows and exterior carpentry also need insulation, but that’s a topic for another article in this series.