12-month Euribor – the rate used to calculate most mortgage repayments in Spain – came in at -0.095 in January, down from -0.08 in December, the twelfth consecutive month of negative Euribor interest rates.

Compared to January last year, when Euribor was 0.042 (the last month they were in positive territory), the benchmark interest rate for Eurozone mortgages was down by 326%.

As a result, borrowers in Spain with an annually resetting Spanish mortgage will see their mortgage payments fall by around €7 per month for a typical €120,000 loan with a 20 year term.

The latest figures from the National Institute of Statistics (INE) show that new mortgage lending jumped 32.2% in November compared to the same month in 2015. New lending rose 6.4% in August, 10% in September, and 16.8% in October, so the trend is clear. The average residential mortgage loan rose 1.8% to €109,785, with an average interest rate of 3.22%.

New mortgage lending indicates new buyers and money flowing into the housing market, but at the other end of the pipe mature mortgages are being paid off or bad loans written off at a faster rate than new lending, meaning that the overall value of mortgage lending is still shrinking. Nonetheless, robust growth in new mortgage lending is a healthy sign after a deep crisis like the one Spain has been through.

I would like to point out, as I do every month, that negative base rates are a sign that things are not all well, but they are also a golden opportunity for investors to buy Spanish property near the bottom of the market with a long-term fixed-interest loan at a time when borrowing money is probably as cheap as it is ever going to get. This next chart helps to illustrate just how low interest rates have gone.

There are already signs that rates for fixed-interest mortgages are starting to rise. In January banks BBVA and Bankinter announced they plan to raise the fixed rate they offer on mortgages between 10 and 30 year terms. And the following chart shows how the yield curve has risen in the space of six months, which implies that fixed-rate mortgage interest rates will also have to rise. 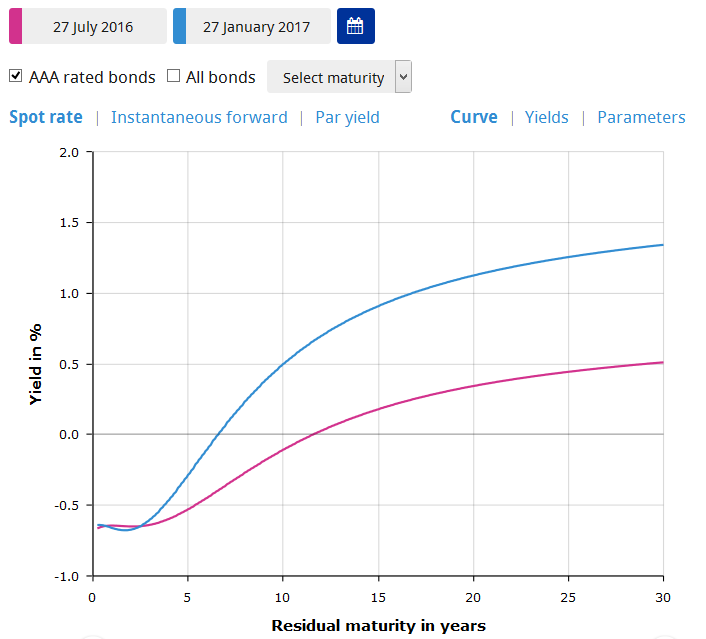