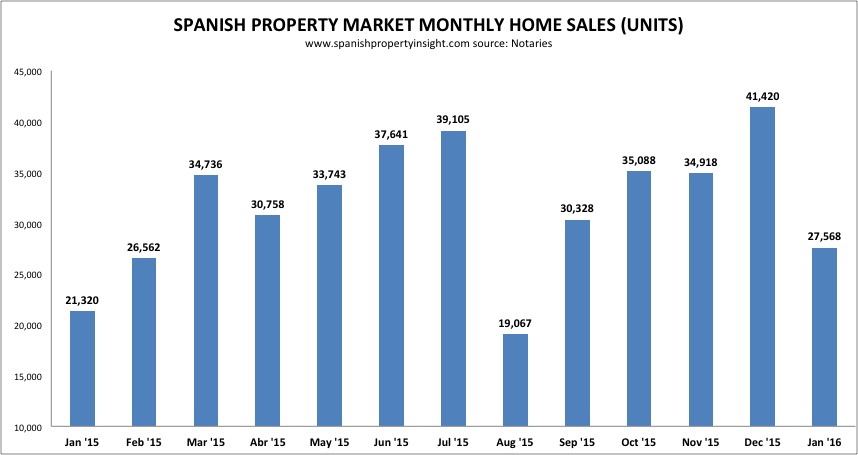 The Spanish property market kicked off the year with a blast, as sales surged and house price increased, but the reality might not be as good as the numbers suggest.

There were 27,568 home sold in January (transactions witnessed in person by notaries) according to the latest data from the General Council of Notaries (see chart above). That represents an increase of 27% compared to the same time last year (next chart).

However, the chart also shows that January 2015 was 11% down year-on-year (due to fiscal changes in recent years that have played havoc with sales in the Dec/Jan period), so this January’s big percentage increase might have more to do with weak sales last year than strong sales this year.

The notaries do not publish sales figures by region, so these numbers don’t tell us where the hotspots were, though it’s likely sales were up the most in Barcelona, Madrid, the most popular towns on the Mediterranean coast like Marbella, and the Balearic and Canary Islands.

Average Spanish house prices (in terms of €/sqm) rose 2% in January compared to the same last year, having climbed from an annualised decline of 6% in January 2015( and -8% a year ago in March 2015).

The chart suggest that, although house prices have crawled back into positive territory (based on the price of property sold), they lack the momentum to rise fast anytime soon. And house prices are still 31% below their 2007 peak, according to this data.

In the context of the SPI House Price Index Tracker, which includes the seven most watched house price indices in Spain, the latest data from the notaries reinforces the picture of Spanish house prices stabilising in mildly-positive territory, after years of big declines.

The most reliable way to work out where any advanced housing market is headed is to look at mortgage lending. If banks are enthusiastic about extending mortgages, then sales will go up. The latest figures show that banks are still keen to lend to people buying homes in Spain. There were 11,884 new mortgages signed in January, an increase of 30% over the same time last year (see next two charts).

Sales up 27%, mortgage lending up 30%, house prices up 2%: It looks like January was a great start to the year for the Spanish property market. However, as mentioned above, the figures might be somewhat misleading due the wild ups and downs in the percentage change of sales at the end of every year these last few years, for which Government tax policy can be blamed. Even so, it was an encouraging start to the year, as many commentators have worried that the political situation might put off buyers and undermine the recovery. That doesn’t appear to have happened in January.