Glut Of New Homes Shrinks, But Is It Enough?

Spain’s glut of new homes languishing on the market in search of a buyer is slowly shrinking, but not fast enough to solve the core problem of what to do with Spain’s excess new housing inventory.

The number of new homes on the market at the end of 2014 fell five per cent over 12 months to 536,000 homes, down from 564,000 the year before, according to figures from the Ministry of Public Works (Fomento). The map above, prepared by the Spanish daily El Pais, shows where the glut is most concentrated by province.

The term “new home” is becoming blurred in Spain, as there are hundreds of thousands of homes on the market that were built years ago but have never been sold. How “new” is a home that was finished five years and has been standing empty whilst depreciating ever since? Therefore, as far as these figures are concerned, it’s more accurate to consider the glut of new homes as never previously sold, rather than brand new.

The new housing inventory peaked in the year 2009 with 650,000 homes on the market after Spain’s decade-long building boom created a mind-boggling oversupply of housing. Peak to present, the glut has shrunk by 18% over the last five years, as illustrated by these graphs, once again from the Spanish daily El Pais. 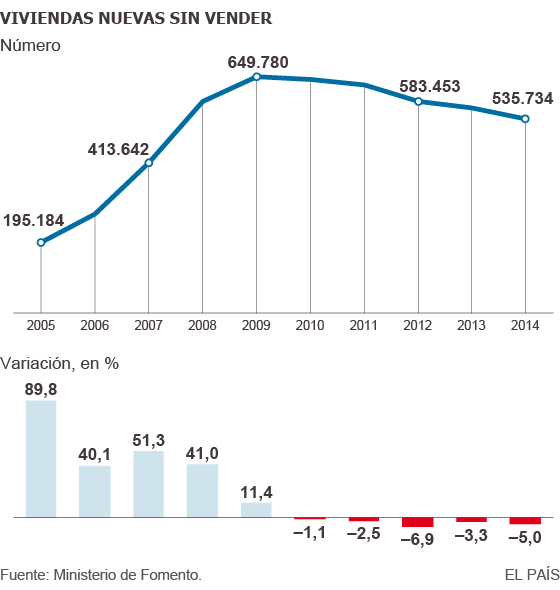 The new homes glut is shrinking because the Spanish building industry has collapsed, which means there are hardly any new developments in the pipeline to add to the stock of property for sale – some would say that is a good thing (though I would argue there is also now an acute shortage of new developments in some areas and segments).

At the same time, demand is picking up after years of decline, so more sales are being made, including “new” homes, helping to absorb the excess inventory.

However, there is no escaping the fact that the absorption rate of around five per cent or less per annum is not going to solve the problem of Spain’s monumental housing glut anytime soon.

Half a million homes languishing on the market year after year, depreciating as time goes buy, and costing the banks a fortune to maintain (write downs, local taxes, community fees, maintenance costs, and cost of capital all add up) are a millstone around the neck of the Spanish property market. A glut is never good for the health of any market.

Why is the glut taking so long to sell? There are many reasons including vendors holding onto unrealistic price expectations for too long (lately prices have fallen to levels at which sales are happening), the incompetence of banks when it comes to selling property, weak local demand, and the mortgage finance drought.

But perhaps the main reason why the glut is still so big after seven years of crisis, is because so many new homes were built in the wrong place during the boom, where it turns out there is no demand in normal times.

Tooo many homes were built in second rate locations on the coast, in places like Almeria (Costa de Almeria property), Murcia (Costa Calida property), and Castellón (Costa del Azahar property), and in the interior of Spain, where the population is now declining.

Thanks to foreign demand, homes near the coast might get sold sooner or later, if the price is right, and if they are not too unattractive, though it could take years for the market to digest that glut. Builders in the boom years wildly overestimated foreign demand.

But who will buy the homes built around provincial capitals in the interior, where the population is declining? If there is no demand for these homes, at some point (already in the past) it becomes cheaper to knock them down.

The Government calculates the housing inventory each year by adding the net new homes figure (new building completions minus new build sales in period) to the end of year inventory. The new homes inventory compares to an overall housing stock of 25.5 million homes, and an overall inventory for sale (including resale homes) of 3.4 million homes (in 2011, according to the INE).