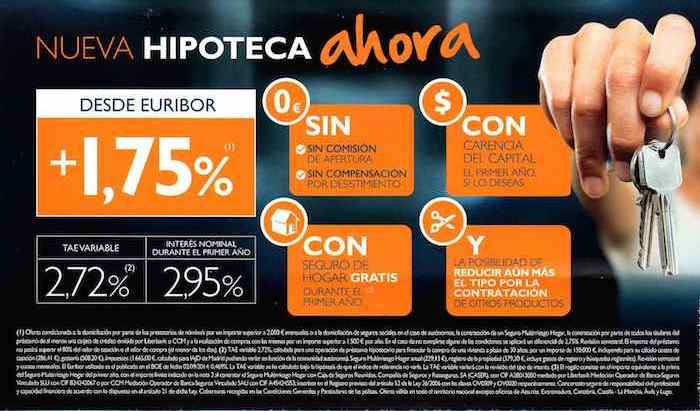 Mortgage junk mail is beginning to show up in letter boxes in Spanish cities like Barcelona and Madrid for the first time in seven years. If banks are keen to seek out mortgage clients, what does that mean for the housing market?

One reason why the Spanish property market has crashed so badly is because the credit crunch just keeps grinding on in Spain, years longer than other countries like the US and the UK. When banks turn off the mortgage taps that takes potential buyers out of the market and starves the market of funds. Many Spanish families, who could afford to buy with a mortgage, have been shut out of the housing market for the last seven years. As a result cash buyers, and foreign buyers with access to funding outside Spain have been growing in importance, taking advantage of a market depressed by lack of funding.

At the height of the boom Spanish banks and cajas were falling over themselves to lend mortgages to anyone with a pulse. Loans were often higher than the value of the property being purchased and cash-backs were common. Corruption in lending was rife. It’s hardly surprising a real estate bubble inflated with lending standards like that.

So it’s noteworthy to see lenders sticking a toe back in the water of the Spanish mortgage market. Banks only start lending mortgages if they are confident in the housing market and believe that homes will hold their value or even increase in price. They are not keen to lend against assets with declining values. Having taken over the housing market in recent years, banks also have plenty of data on transactions and prices, and are in a good position to judge where the market is going.

This comes at a time when there has also been an improvement in mortgage data, with mortgage lending up 17 percent in July despite a fall in home sales, according to recent data from the General Council of Notaries.

Of course one swallow doesn’t make a summer, but the reappearance of mortgage junk mail might be a leading indicator for rising demand, albeit a quirky one.