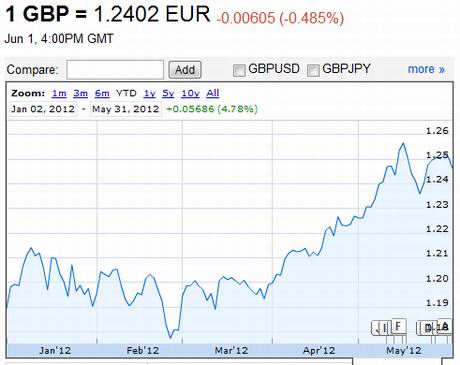 Currency fluctuations that can make or lose people considerable sums have been a huge factor in the FX market over the last few weeks.

By Luke Trevail of TorFX

The peaks on troughs that we have experienced throughout May saw prices swing from €1.23 to €1.2550 in a day more than once as news from the Eurozone dominate the news feed.

Greece, Spain, Portugal and Ireland all had a cloud of uncertainty loom over them, with calming winds still unlikely to ease the woes any time soon. June will bring a fresh elections in Greece and the need to confirm to the Euro rules set to them will determine whether the first casualty of the debt crisis will fall miserably from the comfort of the single currency or just about cling on.

Focus could then fall on to Spain as they look likely to be the next, and biggest name really at risk of further frailties.

As recent as this week we heard of fears increase over Spain’s troubled retail banking sector, as news emerged that three of the country’s leading banks were considering an emergency ‘merger’ in order to shore up their flagging balance sheets.

The news saw the yields on Spain’s benchmark 10-year bonds spiral to 6.5%, perilously close to the 7% threshold considered by analysts to be unsustainable. The Spanish banking sector’s apparent funding gap has elicited market whispers that the country’s government is preparing to introduce a scheme which will permit regional authorities to borrow government funds using guaranteed bonds, which have been rather awkwardly dubbed ‘hispanobonos’.

Rumours suggest that these hispanobonos may be introduced in the very near-term, some analysts have hinted by June 1st.

Their potential advent has been interpreted by many commentators as an act of brinkmanship by Spain’s policy-makers. The suggestion is that their instigation would mark the de facto introduction of ECB-backed Eurobonds – a move which leading European superpower Germany fervently resisted at last week’s Brussels summit – as it is likely that the Spanish government would encourage the banks to swap their hispanobonos for ECB-backed bills. If Germany starts to resist such a move, then the eurozone itself may begin to unravel.

The long and short of the news this last month is that anyone who still has Euros to offload should seriously consider protecting themselves prior to any big move in the market, while those people who are looking for good rates buying the Euro may want to sit on their hands for a little longer as uncertainty, if nothing else will drive this market, likely in your favour.

Luke Trevail is a foreign-currency broker working for TorFX, a forex broker established in 2004 to provide foreign exchange and international payments to both individuals and companies. TorFX is authorised by the Financial Conduct Authority under the Payment Service Regulations 2009 for the provision of payment services. Their FCA number is 517320. To verify their authorisation, you can visit the Financial Services Register and search the register using their FCA number.

One thought on “Forex News: Volatility and uncertainty dominate”

6 irresistible and affordable properties on the Costa del Sol