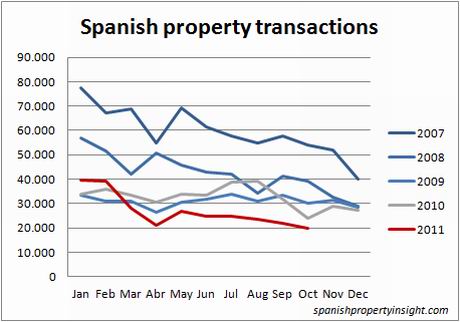 Home sales fell below 20,000 for the first time, according to figures from the National Institute of Statistics (INE).

There were 19,801 homes sold in October (excluding social housing), the lowest monthly sales figure since the crisis began.

That means the Spanish property market shrank 17pc compared to a year ago, and 10pc compared to just a month ago. Compared to 2007 the market has collapsed a whopping 63pc in volume terms alone.

Despite an encouraging start, with sales rebounding in January and February, the market did nothing but lurch down from April onwards. As a result, 2011 is turning out to be the worst year since the crisis began, as illustrated by the chart above.

If you assume property prices have fallen by 30pc (the reality is probably higher), then the property market, once the engine of Spain’s economic growth, has shrunk by 74pc in value terms since 2007.

The sixth year of this crisis is almost upon us and there is still no sign that the overall market has found its floor. Why? Because the credit crunch is back with a vengeance, unemployment is scandalously high and rising, property prices are still falling, and the the Euro’s very existence is now in question. Against this backdrop Spaniards are understandably nervous about buying property.

There are signs, however, that the foreign market for holiday and retirement homes has bottomed out, for the time being at least. Data is hard to come buy, but what little there is suggests that sales to foreigners have increased slightly since a low in 2009. The Spanish economy is suffering more than others, so foreign buyers are in a better position than Spaniards to take advantage of price falls in many coastal areas of 50pc or more.