Housing market contracts most in July since crisis began

The latest figures from the Statistics Institute (INE) confirm the trend of relentlessly bad news from Spain’s property market. July’s sales were the lowest since the crisis began, by a wide margin.

Last week, figures from the Departing of Housing (Fomento) showed the Spanish housing market shrinking an annualised 41pc in Q2. Today’s figures from the INE for July tell a similar story: Excluding social housing, there were 24,831 residential property sales in July, down 36pc on the same time list year, and up just 1pc on the previous month.

As the chart above illustrates, 2011 is turning out to be the worst year for the Spanish property market since the crisis began. Year to date, the market is 15pc smaller than last year, and 55pc smaller than 2007.

Factor in price declines of around 30pc, and the value of the Spansih property market has fallen something like 70pc since the peak of the boom. For an economy that came to rely on real estate to pay the bills, that is nothing short of a disaster.

As the following chart illustrates, the Spanish property market has shrunk for 10 out of the last 12 months, in volume terms. In value terms, it has almost shrunk every month for the last 5 years. 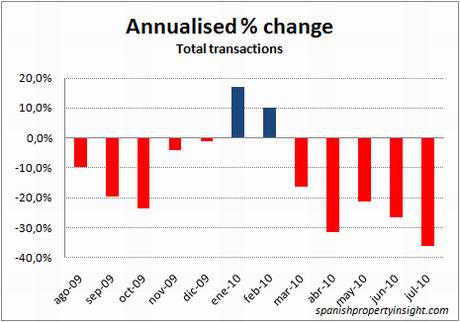 When I think back to 2007, it amazes me to remember the swagger and sense of invincibility prevalent in the sector. How we have fallen, and how true that pride comes before a fall.

For what it is worth, I think we are slowly approaching a bottom, but a meaningful recovery in transactions and prices is far from imminent. That said, there will be good opportunities to be had for buyers, and the best operators will flourish as we bump along the bottom: some already are.

The following table summarises the key transaction data month-by-month for the last 5 years.