Home sales cooling down as the year progresses

Property market expands in March, but can it keep it up?

The Spanish property market expanded in March, though less vigorously than in February, according to the latest house sale figures from the National Institute of Statistics (INE).

Excluding social housing, there were a total of 33,632 residential property sales in March, up 8.2% compared to the same month last year. Good, but disappointing after February, when sales rose 16% over 12 months.

The following chart shows the number of monthly home sales over the last 12 months:

Year-on-year, the market has grown for 3 consecutive months, suggesting a timid recovery in sales is underway. But month-on-month, sales fell 6% in March, down from 35,720 in February, We need a few more months to see if a clear trend towards growth is emerging.

And compared to March 2007, the market is still 50% smaller, so any talk of a recovery has to be understood in the context of a massive drop from peak-to-present.

And for the first time in more than a year, resales outnumbered sales of newly built homes, as they should do in a normal market. 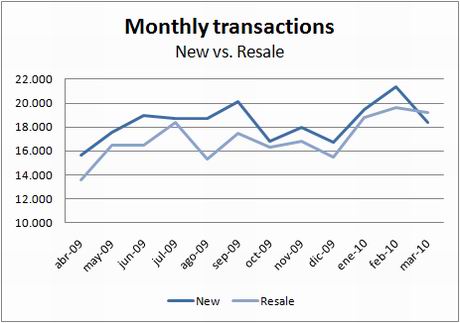 I have been warning for some time that new home sales might fall off a cliff once off-plan sales commitments made in happier times are completed. If new home sales keep falling, as I expect they will, it is unlikely that resales will increase enough to keep the overall market from shrinking again.

And as you can see from the following table, the improvement in sales in March was not spread uniformly around the country. In Malaga province, home to the Costa del Sol, the market shrank by 27%, with a 40% collapse in new home sales.

Much of the improvement came from resales in Barcelona and Madrid – markets where holiday home and expat buyers are thin on the ground.