Spain is one of the very few European countries where property prices have not risen in any quarter since the economic crisis began, according to the latest property price index published by the international real estate consultancy Knight Frank.

“Those European countries yet to record their first quarter of growth since the credit crunch include Spain, Denmark and Ireland where an oversupply of stock is holding back prices,” explained Liam Bailey, head of residential research at Knight Frank. “This contrasts with the UK, which, despite being hit extremely hard initially, is staging a strong comeback as a shortage of houses for sale is contributing to rising values with demand outstripping supply.”

The situation is rosier in most of the other countries tracked in the KF index. “House prices are now rising in a clear majority of locations around the world with almost 70% of the locations in the Knight Frank Global House Price Index reporting growth in the third quarter of 2009. This compares with under 50% during the second three months of the year,” said Bailey.

“There is still, however, a clear polarisation from the top to the bottom of the table. Israel remains the best performer on an annual basis and is the only country to have recorded double-digit growth (+13.7%) during the past 12 months. Prices in Dubai have fallen the most (-47%), despite posting a small recovery (1.2%) in the third quarter. The recent debt issues with Dubai World and the subsequent loss of confidence by investors means even this nascent rally is already under threat.”

Anyone familiar with Spain’s monumental property glut will not be surprised to learn that Spain is not keeping up with signs of a housing market improvement in most other countries. But at the same time it’s safe to assume that the recovery will come to Spain, one day.

And Spanish property investors may find crumbs of solace in the plight of Bulgaria and Dubai, both big competitors for the attention of international property investors during the boom. In the year to the end of Q3 investors lost 28% in Bulgaria, and a mere 47% in Dubai. The 8% capital loss in Spain seems quite mild in comparison. 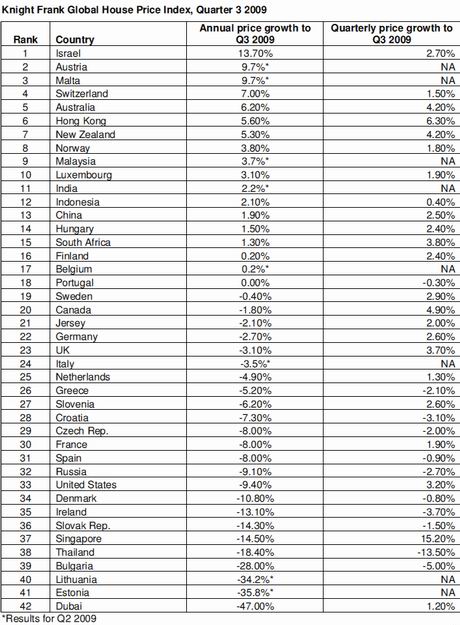