Casa La Manzana is the most expensive home for sale in Spain. Mark Stücklin takes a look inside

If the Great Gatsby were house-hunting in Spain today, he would probably buy Casa La Manzana in Sotogrande, at the western tip of the Costa del Sol. On the market for €24m (£16.5m), it’s the priciest place in the country. Candida Taylor, head of Predio Estates, the agency handling the sale, reckons there are probably only about 200 prospective buyers worldwide. This is billionaire turf.

The agents are tight-lipped about the vendor’s identity, but 30 seconds in the bar at Sotogrande’s marina are all you need to find out that he’s Joseph Kanoui, 69, the French business tycoon whose syndicate bought Cartier in 1972, and who retired in 2004 as chairman of the Vendôme Luxury Group, a subsidiary of Richemont, the giant Swiss conglomerate that owns brands such as Van Cleef & Arpels and Chloé. The publicity-shy Kanoui and his wife Micheline, a jewellery designer, entertained the cream of French society at La Manzana, known locally as the “Cartier house”.

La Manzana certainly looks the part of a magnate’s holiday pad, although if anything its architecture and interior are too tasteful to appeal to some of the newest moguls on the planet.

More of a small palace than a villa, the house’s exterior is all warm yellow stucco, which looks grand in the lush greenery of the surrounding gardens. The design is described as “Andalusian neo-Palladian with a hint of Mudejar”, but the main house looks more like a handsome interpretation of the style that dominates the Costa del Sol’s gated communities, with an asymmetrical facade, irregular forms, square towers and more than 10 low-pitched, terracotta-tiled roofs.

It’s big, it looks great and it’s reassuringly expensive: the perfect holiday home to shock and awe your old buddies from Siberia. 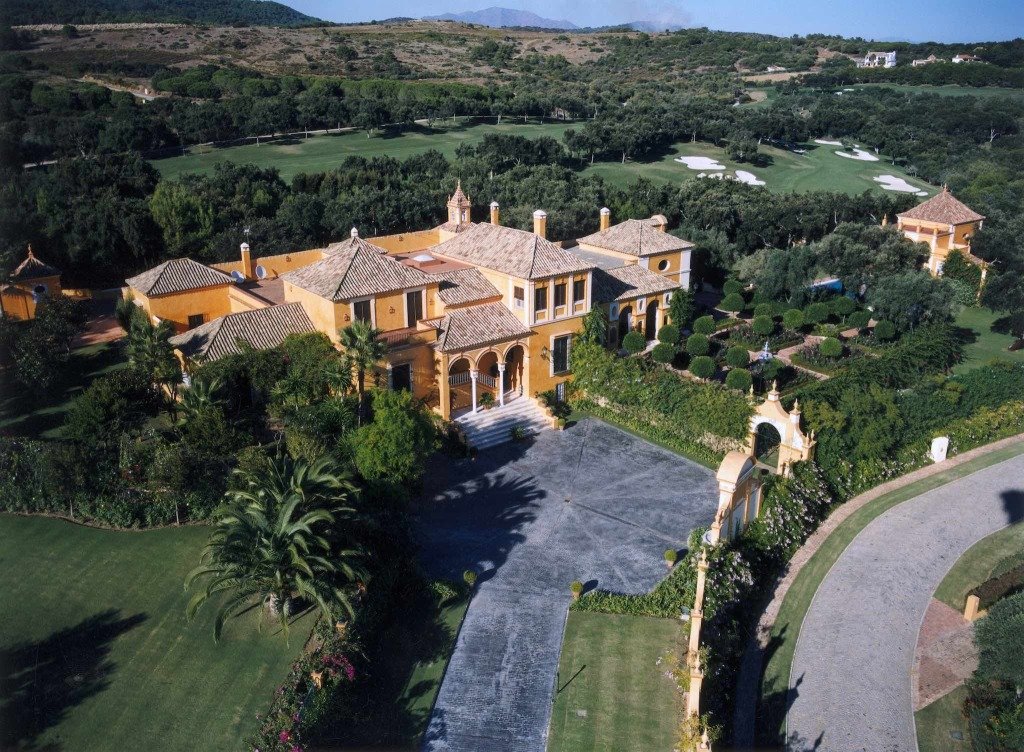 The vital statistics will also please status-conscious buyers. Set in 5 acres and taking up seven plots in one of the poshest districts of Sotogrande — itself the poshest bit of southern Spain — La Manzana is more like a hotel than a private property. The Wendy house in the children’s playground, tucked discreetly away in a corner of the enormous garden, looks more expensive than the average British-owned villa in Murcia.

Along with all the formal and informal reception rooms that a socialite is likely to need for entertaining on a lavish scale, the house also has nine bedrooms, all with en-suite bathrooms and all of generous proportions. The ceilings are high — 3m (10ft) or more — and marble flooring with underfloor heating and air- conditioning comes as standard in most rooms. As you would expect, there is also a huge kitchen, sauna, gym, walk-in safe, staff accommodation and multiple utility rooms. The property is south-facing, with large windows and lightwells that deliver plenty of natural light — always important in a big house that might feel gloomy otherwise. And the last thing that the new owner will want to feel after investing so much on the Costa del Sol is glum.

The house is offered for sale fully furnished, except for some specific pieces of furniture and art. This may be a big plus for those who have not yet developed their taste beyond the instruction, “Give me the most expensive thing you’ve got. Now!”, and so don’t mind buying good taste from someone else. Having said that, the decor in some of the rooms — especially the guest suites — is expensive but neutral, so oil tycoons with a yen for some bling, and ornate furniture with plenty of gold leaf, might see redecorating La Manzana as a great opportunity to spend even more cash.

Just off the east wing of the main house lies the 16m-long pool, with a sumptuous pool pavilion. The pavilion contains a kitchen, covered barbecue, shower and changing rooms, plus a large dining room decorated with Seville tiles and hand-painted murals, covered by a vaulted ceiling.

The symmetry of the pavilion’s architecture, with its low wings sweeping away from a portico in front of the pool, might explain where La Manzana got its neo-Palladian tag. The architect was apparently dragged off a beach in mid-August to redesign the pavilion, which he did on the back of two paper napkins in the beach bar. The result is probably the grandest pool pavilion in all of Spain, accessed by stairs sweeping down from the main house.

The gardens of La Manzana are suitably impressive. They cover five of the seven plots included in the property, and as oligarchs know, big is always better. But not only are they big, they are also fully landscaped, complete with sweeping, manicured lawns, a 30m pink bougainvillea-covered colonnade, carefully laid-out walks through well-tended flower beds, vegetable and herb gardens, citrus and cork trees, a playground, numerous statues and fountains, and a cascade bubbling down the hill to the main entrance of the house. There is also a pretty gazebo with views over the fourth fairway of the Valderrama golf course, plus a private well and automatic irrigation system.

Location-wise, La Manzana is a bit offbeat for your average oligarch, most of whom instinctively head for the flashier developments around Marbella, such as La Zagaleta and El Madroñal. Sotogrande, on the other hand, is more discreet, and so appeals to the wealthy establishment.

“Since its beginning in the early 1960s, Sotogrande has always been popular with the Spanish and European aristocracy, old-school captains of industry and ambassadors,” says Bernard Hornung, sales director of Nefilin SL, a local developer. However, any new-money men with an ambitious social agenda will find that Sotogrande is the perfect place to mix with old money and high society.

Within Sotogrande itself there is a pecking order of locations.

“Wealthy Spaniards, who are by nature gregarious, generally want to be around the Royal Sotogrande golf course and near the beach club,” says Hornung. “A double plot in that area was recently bought by a private Spanish buyer for about €10m. Big-budget foreign buyers, on the other hand, tend to prefer the tranquillity, privacy and extra security of Los Altos de Valderrama, where La Manzana is situated.”

Los Altos is an exclusive gated community within a gated community. Only owners and their guests are allowed past the security barrier. In 2004 Sotogrande was hit by a wave of robberies in which sophisticated gangs outfoxed the most advanced home-security systems. So Los Altos’s extra barriers will appeal to those who feel the need to travel with their own bodyguards.

But no property is perfect, and La Manzana is no exception. Finished in 1993, it lacks the latest home-technology gizmos — there are no touch-screen panels to control the lighting, temperature, music, and access to all rooms — common in more recently built luxury properties on the Costa del Sol. And while the standard of fixtures and fittings is high, they don’t look and feel like the very best that money can buy.

A more serious problem, though, is lack of privacy from La Manzana’s surrounding properties. To the south, the house is in full view of numerous semi- detached properties and small villas — you can see them, and they can see you. So, as things stand, the property is too exposed for it to be an ideal holiday sanctuary for celebrity guests. On the positive side, however, some fast-growing trees planted along the southern border might be enough to shield the house from the gaze of others within a few years.

Is it worth €24m? Super-luxury properties on the Costa del Sol often sell for substantially less than their asking price. La Manzana — the most palatial property in the neighbourhood — is in a class of its own in terms of typical asking prices in Sotogrande, where even exceptional properties go for between €6m and €10m.

To get into the €15m-plus asking price bracket you have to go to Marbella, where there has been at least one property in the past with a higher asking price — more than €25m — in the luxury development of La Zagaleta. Properties for €15m and over are either detached beachfront villas on “the Golden Mile” that runs from Marbella to Puerto Banus, or swanky large pads on the exclusive developments set back from the coast, such as La Zagaleta and El Madroñal.

On the other hand, prices are a function of supply and demand, and while there are precious few properties around like La Manzana, the number of global billionaires is rising sharply. All we can be sure of is that the buyer will have to be fabulously wealthy.