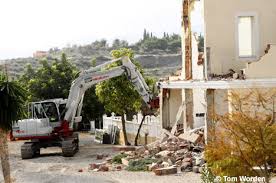 The British community in Almeria, many of whom own homes declared illegal, are starting to make progress in their campaign to defend their homes from demolition, reports Spain’s leading newspaper El Pais.

They are fighting to save some 5,000 homes from the threat of demolition in a handful of Andalucian municipalities, mainly in the Almanzora valley.

There are an estimated 500 to 600 illegal homes in the Albox municipality alone, most of them owned by Britons.

Owners are represented by activist groups such as the Abusos Urbanisticos Almanzora No! (AUAN) whose slogan is “Campaigning to legalise homes in the Almanzora Valley.” The AUAN have organised protests and put pressure on the local and regional government, who have finally started talking to the AUAN about solutions. That is a step forward.

After years of blaming foreign buyers and threatening their homes with demolition, the regional government appears to be leaning towards an amnesty that legalises the great majority of homes.

Moving towards a solution

The Junta appears to be taking a softer line with the victims of planning abuses that the authorities should never have let happen.

Officials from the Junta say they do not want to “criminalise the situation” and are committed to finding a “transparent” solution and “consensus” over a road map, report El Pais.

The first step will be to measure the problem by auditing all the illegal building. Black spots such as Albanchez, Arboleas, Albox, Lubrín, Cantoria, Zurgena, Partaloa and Oria are planning to do this.

This will provide “a tool for town halls to understand the scale of the problem and how they can exercise their municipal responsibilities,” a regional official told El Pais.

It is the first time the regional government has taken into account the victims of planning abuses, and given them access to the process to find solutions, reports El Pais.

El Pais fail to make the point that, quite apart from the question of justice, the government’s behaviour has done untold damage to the region’s reputation as a home-buyer’s destination. This is all bad news for the local economy, which doesn’t have much going for it anyway.

But despite positive signs that the Junta might take a softer line, this saga is bound to last some time yet.

Perhaps the darkest hour came when the authorities demolished the home of British pensioners Len and Helen Prior in January 2008, even though they had planning permission from the town hall. Since then, dozens of other foreign-owned homes built on rustic land have been served with demolition orders.