In fact, if you just look at the ordinary housing market, the uptick was even better. Excluding social housing there were 116,664 house sales in Q4, a rise of 5.5%. Regrettably, that’s where the good news ends.

As you can see from the following table some regions did better than others. Looking at a selection of regions popular with holiday home buyers, the inland province of Teruel suffered the most in 2009, down 36%, followed by Las Palmas in The Canaries, down 32%. At the other end of the scale, Spain’s two big cities did the best, down just 1.7% in Madrid and 3.9% in Barcelona. 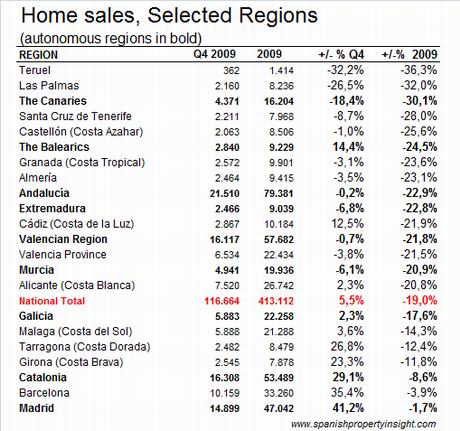 Look closely at the table and you will see that the small national uptick in Q4 that got the Ministry excited was almost entirely driven by big increases in Catalonia and Madrid (Barcelona +35%, Madrid +41%). Why the big surge in home sales in those two cities in the last quarter of 2009? I don’t know. But I wouldn’t be surprised if it had more to do with banks shifting properties around their balance sheets than families buying homes to live in.

Foreign demand for Spanish property in the last quarter of 2020