Spanish home sales figures released for October 2019 show a small but sustained decline in the housing market, which has been shrinking for five of the last six months.

October data from the Association of Spanish Notaries based on sales witnessed by their members in the month shows sales down 1% to 50,176 home sales closed in October. That said, the market is still 83% larger than it was in the crisis year of 2013.

October figures from the INE based on sales registered in the month by the Association of Spanish Land Registrars shows inscriptions in the Land Registry down 2% to 42,825 including subsidised housing, known as VPO.

The data from the INE lags the market by a month or two, so the figures from the notaries are more timely, but both sources paint a similar picture of a housing market losing steam in the last six months.

The INE figures also reveal how sales are going in different regions, and how new home sales are performing.

October was a bad month in terms of sales for most areas of interest to foreign investors. Notwithstanding a 21% increase in the small market of Huelva province, home to the Costa de la Luz, and a modest increase in Valencia City and Madrid, sales were down in all other areas of interest, and as much as 23% in the Andalusian province of Almeria. 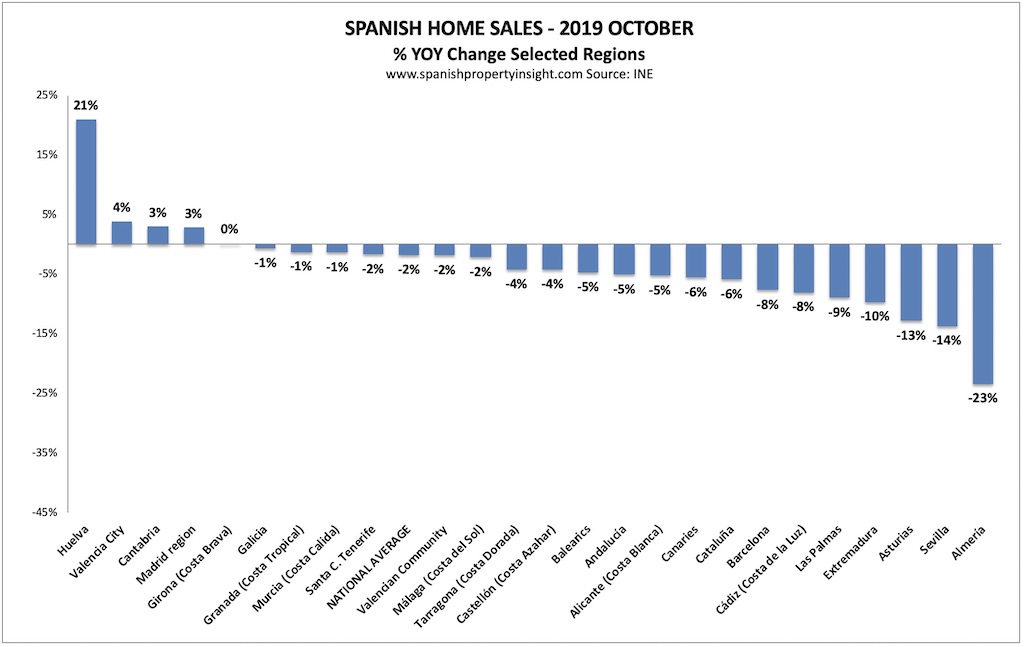 Year-to-date the picture is a bit better but there are still significant declines in the key regions of Alicante (Costa Blanca -8%), Malaga (Costa del Sol -9%), the Balearics (-10%), and the Canaries (-15%).

The slowdown in home sales we are witnessing is partly due to a new mortgage law introduced in June intended to protect borrowers, but which actually makes it harder to get a mortgage, especially in the case of foreign buyers. The Spanish property market is also facing other headwinds such as: