Q1 2019 foreign demand for property in Spain: first decline since the recovery began

The number of Spanish homes acquired by foreign buyers declined in the first quarter compared to the same period last year – the first annualised decline in any quarter since foreign demand started to recover back in 2010, four years before local demand began to recover.

The number of property sales deeds registered in the Spanish land register by a foreign buyer in the first quarter of this year numbered 16,331, according to the latest report by Spain’s Association of Land Registrars. That compares to 16,833 a year before, a decline of 3%.

By country all the big European markets decline together in Q1, the first time that has happened since the crisis. Sweden led the way down with a slump of 35% compared to last year, followed by Belgium, Germany, the UK and France all on the skids. These are the main markets for holiday-homes on the Spanish coast. 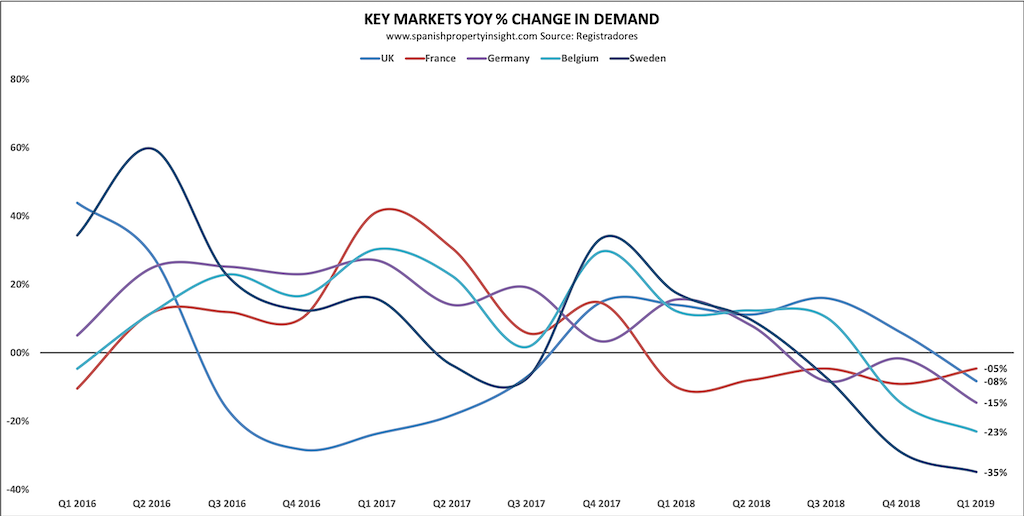 The increase in demand from countries like Morocco, China, Algeria, and Romania is driven by economic migrants and Spanish Golden Visa investors, who do not normally buy homes in the holiday resorts of the coast.

Local demand grew by 4.8% in the same period to 117,529 homes sales inscribed in the register. As a result the market share of foreign buyers dipped slightly to 12%.

It looks like foreign demand for second homes in Spain is going soft. After about nine years of growth there was bound to come a time when demand cooled off, but it doesn’t bode well for all the new developments on the Spanish coast targeting European holiday-home buyers.

The factors driving the change in demand will vary from market to market. If there are any factors in common they might include high property prices in Spain now that prices have recovered from crisis lows, high transaction costs, bureaucratic hurdles and lack of market transparency.

The trend in foreign demand is clearly downwards and looks set to continue so in the next few quarters at least.