The number of Spanish home sales inscribed in the National Land Registry rose by 11% in 2018 compared to the previous year, show the latest figures from the National Institute of Statistics (INE), as illustrated by the chart above.

There were 465,083 Spanish home sales inscribed in the Land Register in 2018, and 515,051 if you include subsidised homes (known as VPO), all according to the latest figures from the INE, based on source data from the Spanish Land Registrars’ Association.

In December there were 30,494 residential property sales inscribed, up 6% compared to the same month the previous year.

Despite lower growth in 2018, sales of both new and previously occupied homes were positive in December, with growth in new home sales having been positive almost every month for the last two years. That said, whilst resales have recovered much of the ground they lost in the bust, new homes sales are still a far cry from what they were in the boom years. 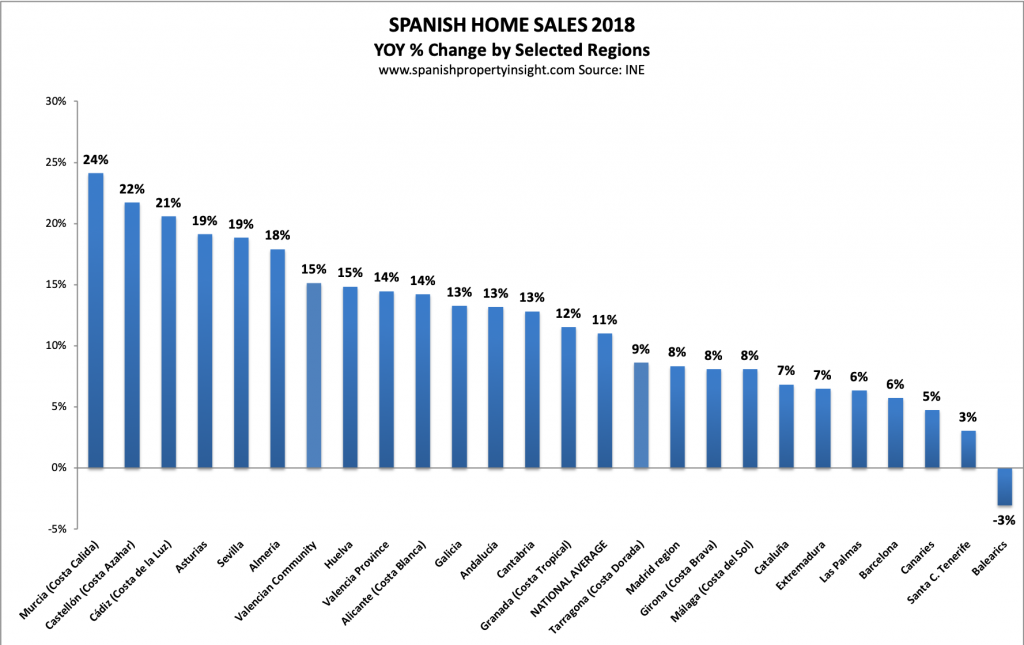 By region, home sales in 2018 increased in almost every region of interest to foreign investors, with the exception of the Balearics, where sales were 3% lower than the previous year, perhaps partly due to a lack of supply given land limitations on the islands. Sales growth was also subdued in the Canary islands, perhaps for the same reason, and in Catalan provinces (Barcelona in particular), where political uncertainty is likely to be taking its toll on investor confidence. The biggest increases were to be found in small markets like Murcia, Castellón, and Cádiz, where a small increase in sales from a low base translate into big percentage gains. Compared to past years, the sales growth in the key regions of Alicante (Costa Blanca) and Málaga (Costa del Sol) were relatively subdued.

Looking just at December, we see sales down heavily in the Canaries and to a lesser extent in the Balearics, sales surprisingly flat in Alicante, and surprisingly strong in the Catalan provinces of Barcelona and Girona (Costa Brava).

Overall, the impression I get from these figures is one of continued expansion in the Spanish property market, though 2018 might turn out to be the year when the recovery moved down a gear, as it inevitably must one day.

What about 2019? I see no reason to expect the overall market to stop expanding, though I wouldn’t be surprised if growth slowed down into single figures this year, with significant regional variations. If the problem in the islands is a lack of supply, that won’t go away anytime soon.