The overall Spanish property market continued shrinking in the second quarter, but foreign demand surged, making foreign buyers more important than ever, according to the latest figures from the Dept. of Housing (Min. Fomento).

There were 80,722 Spanish homes sales in Q2, down -4.2pc on the same time last year, but up 43pc on the previous quarter (when sales collapsed artificially due to fiscal changes that pushed sales into Q4 2012).

Excluding social housing, there were 76,933 homes sales in Q2, up a fraction (0.9pc) on the same time last year, and 49pc higher than the previous quarter, so the contraction in Q2 was entirely due to falling sales of social housing.

Foreign demand, on the other hand, surged in Q2, driving up sales in popular coastal areas where foreigners tend to buy. Overall purchases by foreigners rose 29pc over 12 months, and 49pc in a quarter, to 13,632.

Foreign demand simply exploded in popular areas like Malaga province, home to the Costa del Sol, where Foreign purchases rose 61pc over 12 months, and 80pc in a quarter, to 2,028. Foreign purchases also rose 52pc in Girona (Costa Brava), 50pc in Murcia, 45pc in Valencia, 35pc in Alicante (Costa Blanca), and 25pc in the Canaries. In Madrid, in contrast, foreign purchases fell 4.9pc in Q2. 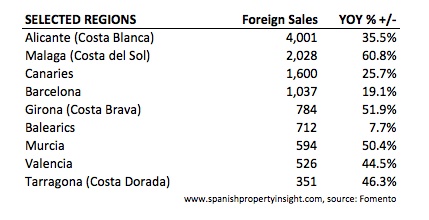 Spain now has a two-tier market, with foreign demand growing, and local demand declining. Foreigners now account for 1 in 6 property purchases, making them more important than ever to the Spanish property market. Foreign demand will get another lift when the Government introduces residency permits in return for property investments in early October.

The measure is expected to be retroactive, so non-EU nationals who spend more than €500,000 on Spanish property today will be able to get a residency permit when the law comes in.