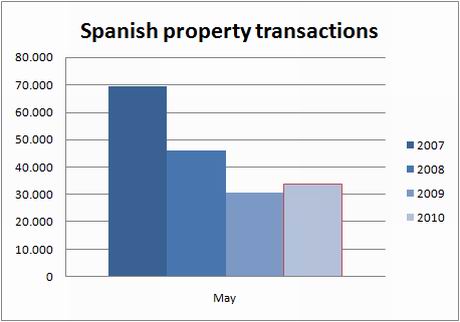 The latest monthly sales figures for the property market are out, published by the National Institute of Statistics (INE). They show the market expanded 10.6% in May compared to the same month last year, but that’s not the real story. The big story is the market is probably worth less than half what it was just 3 years ago, and there’s a lot of economic hardship behind this figure.

But first, what do the latest transaction figures have to say*?

Excluding social housing, there were 33,873 residential property transactions in May, 10.6% up on the previous month, with both new and resale transactions up on the year.

But compared to May 2007, when sales was starting to turn down, the market is 49% smaller as measured by transactions.

And how about by value? All markets are a function of transactions and prices. Transactions tell you the volume or how big the market is, whilst (transactions x prices) gives you the market value.

Well, we know that the market has shrunk by 49% in volume, but we don’t know how much average prices have fallen because the official statistics on this question are baloney (around 10% they say).

Based on talking to estate agents and developers, my best guess is that prices are down somewhere around 30%, but let’s look at a spread between 20% and 40%.

To spell it out, if average prices have fallen 30%, that means the Spanish property market is now worth just 36% of what it was back in May 2007, a value decline of 64%.

That’s a big chunk of output and wealth that has evaporated from the Spanish economy in the space of just 3 years. A lot of people depended on this market for their livelihoods.

It helps explain why Spain’s town halls are 15 billion Euros a year worse off thanks to falling taxes and property-related income, and why a third of them are already struggling to pay their bills, including payroll. Many will go bust this year, especially in regions like Andalucia.

But looking on the bright side, the figures also show that the market has at least stabilised at somewhere between 30,000 and 35,000 sales a month (excluding social housing), and that both new and resale transactions rebounded slightly in May on a monthly basis.

On a yearly basis, the market is still growing, albeit not as robustly as before: The annual rate of growth fell from 17% in April, to 11% in May.

On a regional basis the picture is mixed. The market plunged 17% in Malaga (home to the Costa del Sol), and 11% in Murcia, (home to numerous unsold golf developments), but rose 50% in Huelva (Costa de la Luz), 26% in Catalonia (including Costa Brava and Costa Dorada), and 24% in The Canaries, as you can see from the following table.

What next? I forecast that transactions will bounce along in the same range for the rest of the year, between thirty and thirty five thousand. We will have to wait until next year for a recovery.

*Regular readers of this blog will have often heard me rant about the lack of reliable data, but these transaction figures from the INE are quite credible. Though I suspect they over-state sales by including what are effectively balance sheet operations by banks, I think they probably give us a reasonably accurate picture of what is going on in the market.