Gloomy outlook for the Spanish property market in 2008

It’s going to take a little time to lick this section of the website into shape. As you may have noticed, it doesn’t look anything like the rest of the site, and it’s not very attractive. I’ve got my web designers working on it, but it’s going to be a couple of weeks before this dispatches section has been properly integrated into the site.

In the meantime, here are some thoughts on the current state of the Spanish property market.

For a Club Med country, Spain has some alarmingly Anglo-Saxon disorders in its property market. After a decade of increases, property prices are now in bubble land, and housing affordability has been pushed into uncharted territory. The average Spanish home now costs seven times average earnings, similar to the UK.

So now that property prices have started to fall or stall in Anglo-Saxon countries like the US and the UK, will Spain follow suit? And if so, will the market float down to a soft landing like an autumn leaf, or hit the ground with a splat like rotten fruit?

The early signs are not encouraging.

Although government figures show annual property inflation slowing steadily from a high of 18.5% in 2003 to 5.3% at the end of September 2007, these figures are notoriously unreliable. In many popular coastal areas where the British tend to buy, such as the Costa del Sol and the Costa Blanca, agents report that prices have been stagnant or falling for some time.

Figures from Spain’s property register show that the market is shrinking. Transactions fell by 9.3% in the first 9 months of 2007, and by 12.1% on 12 month basis. Estate agents are closing or downsizing in droves as a result.

Developers are having a bad time of it too, as sales dry up, and the credit crunch hits their finances. High profile developers have started to go bust, and the share prices of developers quoted on the Madrid stock exchange fell by up to 70% in 2007 , in one case by 38% in the last 2 trading days of December. The Spanish press is now openly talking about a ‘property crisis’.

There are other concerns too: Unemployment is rising, inflation is up to 4.3%, productivity is low, and Spain’s currently account deficit is the highest in Europe. The outlook for the economy is darkening.

Bad as all this sounds, it doesn’t necessarily spell disaster. It might be the start of a soft landing in which property prices stagnate or fall gently, allowing housing affordability to return to normal levels over a period of years. This is the scenario forecast by most ‘experts’ and the government.
But there are compelling reasons to think that the Spanish property market might tank in 2008, particularly the holiday home market in popular coastal areas where the British tend to buy.

Firstly, the property boom of the last decade triggered a building frenzy that has lead to a glut of properties, especially on the coast. New homes have been built at a rate of between 500,000 and 700,000 per year since the start of the decade, compared to around 200,000 per year in the UK. One leading Spanish savings bank estimates that up to 500,000 newly built properties remain unsold. As the downturn evolves, planning approvals are falling fast.

Secondly, interest rates are still rising. Euribor – the rate most commonly used for mortgages in Spain – is now 4.79%, the highest level since December 2000. Higher borrowing costs and stricter lending criteria in the light of the credit crunch will hit demand, and drive up foreclosures, putting further pressure on the market.

And thirdly, Spain’s property boom has seriously distorted the economy, which is now alarmingly dependent upon construction. The Centre for European Policy Studies estimates that construction investment in Spain has risen to 18-20% of GDP, compared to 8.5% in Germany and 10.5% in France. The Spanish economy has become a real estate junkie, and economic cold turkey looks inevitable. A painful adjustment is likely to hit Spanish demand for all types of property, and holiday homes on the coast will be the first to go.

So if 2007 was a bad year for the market (which it was), 2008 looks like it could be a whole lot worse. I’m expecting to hear the sound of rotten fruit hitting the ground with a splat.

Having said that, Spain is a big country, made up of lots of different property markets. Some will do better than others, and some won’t do too bad. More on this later. 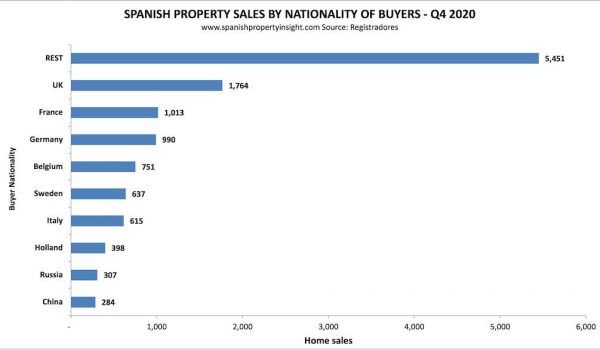 Foreign demand for Spanish property in the last quarter of 2020